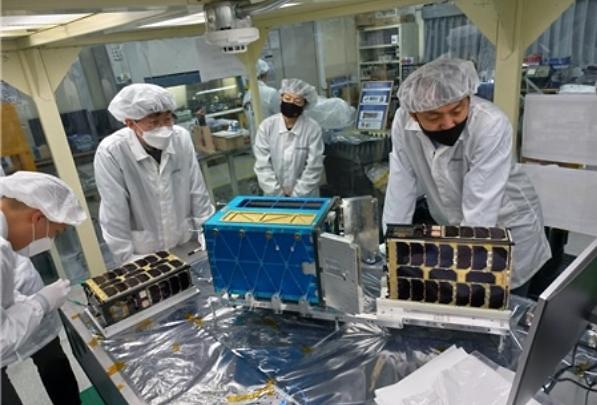 [Courtesy of the Korea Astronomy and Space Science Institute (KASI)]

SEOUL -- After five years of development, South Korea's state space research body has unveiled the real flight model of four homemade nanosatellites weighing less than 10 kilograms that will be launched in 2022 to observe changes in space weather through formation flight.

The flight model called SNIPE was disclosed by the Korea Astronomy and Space Science Institute (KASI) on December 15. Nanosatellite refers to an artificial satellite with a wet mass between 1 and 10 kg. Multiple nanosatellites work together or in formation. A CubeSat, built in cube form, is a common type of nanosatellite.

KASI's nanosatellites will be launched on the Russian Soyuz-2 rocket at the Baikonur launch site in Kazakhstan around June 2022. Their mission is to precisely observe the microstructure of cosmic plasma distribution and the space environment in low orbit through a formation flight that can control the distance between satellites.

KASI said that the nanosatellites would make a six-month flight on a Sun-synchronous orbit at an altitude of 500 km to observe changes in space weather, which is a branch of space physics and aeronomy, or heliophysics, concerned with the time varying conditions within the solar system, including conditions in the magnetosphere, ionosphere, thermosphere, and exosphere.

A Sun-synchronous orbit is a nearly polar orbit around a planet. It is an orbit arranged so that it precesses through one complete revolution each year, so it always maintains the same relationship with the Sun. The orbit is useful for imaging, reconnaissance satellite, and weather satellites because every time that a satellite is overhead, the surface illumination angle on the planet underneath it will be the same.

The flight in column or line enables the observation of spatial and time changes in the distribution of space plasma to a minute level, KASI said, adding it will contribute to improving the accuracy of real-time forecasts and analysis of space storms.

"The mechanism for the creation and extinction of space plasma microstructures around the Earth is a mystery to date. We look forward to opening a new horizon for the study of the space environment around the Earth," KASI's space science division head Lee Jae-jin said in a statement.

The payload includes a high-energy particle detector, an ionosphere plasma measurement sensor, and a precision earth magnetic field meter. Observation data such as aurora particles and the microstructure of plasma bubbles that cause communication problems in the equatorial area will be collected by KASI and NASA together to increase data reliability and accuracy.

"The observation of space weather using a single satellite has shown limitations." "Observation using multiple satellites is a global trend, and nanosatellites are expected to contribute not only to cost reduction but also to discovering new economic values such as expanding opportunities to access space," Lee said.