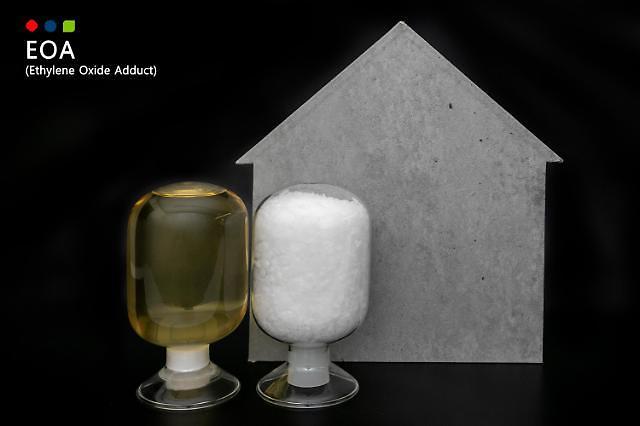 
SEOUL -- Lotte Chemical, a major chemical company based in South Korea, will invest 250 billion won ($211 million) to expand the production of ethylene oxide adduct, a construction specialty material that reduces the use of water in concrete by 30 percent, improves strength, and maintains fluidity for long-distance transportation.

Ethylene oxide adduct (EOA) is a high-value-added raw material for water-reducing agents used in concrete when constructing large structures such as high-rise buildings, bridges, and dams. With a catalyst added to ethylene oxide prepared by oxidizing ethylene, EOA can be produced by reacting it with an alcohol raw material.

With the aim of commercial production in 2023, Lotte Chemical will build an additional EOA production line with an annual capacity of 150,000 tons at its plant in Daesan, about 75 kilometers (46 miles) southwest of Seoul. The production of high-purity ethylene oxide, which is used as a raw material for EOA, will be expanded to 250,000 tons.

As a result, Lotte Chemical's total EOA production at factories in South Korea and China will increase from 330,000 tons to 480,000 tons per year. Lotte Chemical's basic materials business head Hwang Jin-gu said that his company would strengthen specialty material businesses with growth potential that can create stable profits.

"Based on diversified products tailored to customer use, we will try to increase our global market share and profitability by expanding sales power in existing major markets such as India, Turkey, and China while actively pioneering new customers in the Americas and Europe," Hwang said.