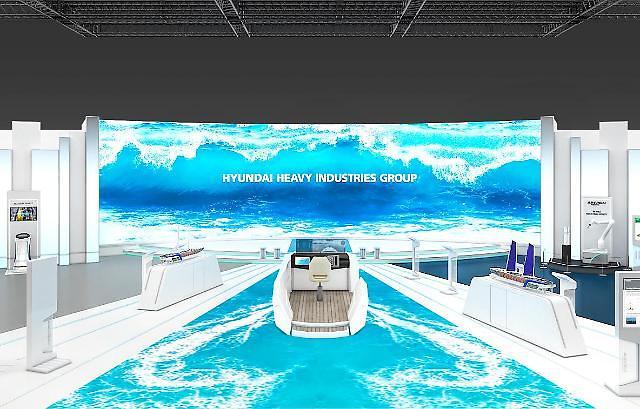 
SEOUL -- At the CES trade fair in January in Las Vegas, South Korea's Hyundai shipbuilding will showcase its self-sailing technology by installing a fully autonomous leisure boat model at its booth and using light-emitting diodes (LEDs) to create a virtual ocean voyage. Visitors can experience a sailing simulation game applied with virtual reality technology aboard the six-meter-long boat.

The shipbuilding group aims to test the autonomous ocean crossing of a large merchant ship in 2022. "Autonomous sailing technology not only lowers the threshold of marine leisure, but can also innovate logistics and change the picture of marine development such as resource surveys, pollution source removal, and marine ecological surveys," an unnamed HHI official said in a statement on December 20.

At an event organized by Avikus, the in-house venture of the shipbuilding group, in June 2021, a 12-seat cruise boat equipped with a self-sailing system made a safe test voyage for 10 kilometers (6.2 miles) without direct human intervention through a narrow canal in the southeastern industry port of Pohang. The boat was able to cope with various unexpected situations using special cameras and LiDAR, which measures distance by illuminating the target with laser light.

HHI tested an intelligent berthing assistance system as well as an advanced voyage support system that automatically recognizes surrounding vessels through camera analysis to determine and alert the risk of collision based on augmented reality. Even when visibility is not secured at night or by sea fog, infrared cameras comprehensively analyze and provide information such as the location and speed of obstacles.