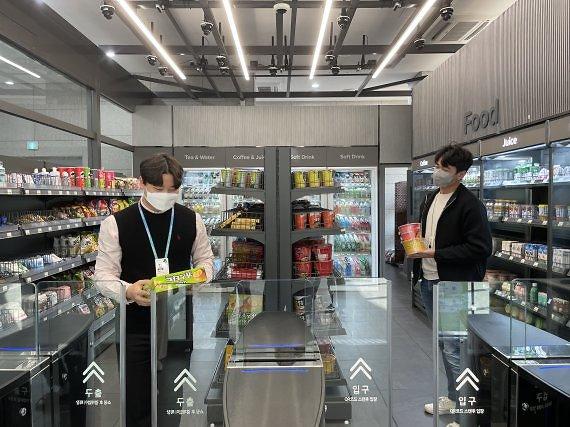 SEOUL -- To demonstrate technologies for the safe management of unmanned smart stores, South Korea's internet watchdog partnered with BGF Retail, the operator of the domestic convenience store franchise CU, to open an unmanned shop at its headquarters building in the southern city of Naju. Data collected at the store will be used to develop new products and services.

Korea Internet & Security Agency (KISA) said in a statement on December 27 that the unmanned smart store called "Tech Friendly CU" was built in Naju some 284 kilometers (176 miles) south of Seoul. Shopping data including video images will be collected at the store to be shared with domestic security companies for the development and upgrade of new smart store-related security technologies. Private companies will be able to demonstrate new products and services at the unmanned store that will kick into operation in February 2022.

As of January 2021, South Korea had some 600 unmanned stores that require customers to scan the barcodes of products they wish to buy and make payments using a credit card or a digital payment method. However, such stores have heavily relied on foreign technology platforms such as closed-circuit television (CCTV) camera systems to reduce security risks such as robbery and hacking.

Many of South Korea's unmanned stores are located inside big buildings or industrial complexes in remote areas targeting workers who have to travel long distances on foot to visit a manned convenience store. South Korea's retail giant Lotte opened a semi-unmanned 7-Eleven convenience store on the 31st floor of the Lotte World Tower in eastern Seoul in 2017, using a biometric payment system that recognizes consumers' pre-registered palm prints.