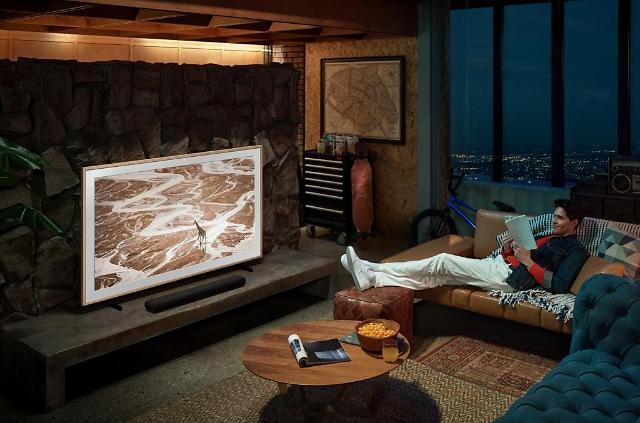 LAS VEGAS -- As a key player in premium TV markets, Samsung belatedly joined a colony of organic light-emitting diode (OLED) panel makers by showcasing QD Display using its trademark quantum dot technology. It is basically based on OLED, but the company bragged about better image quality characteristics than OLEDs.

In a selected media event on the eve of CES 2022 in Las Vegas, Samsung Display unveiled its QD Display lineup, including 65-inch and 55-inch panels for TVs and 34-inch gaming monitors, at a private booth, saying QD Display has the widest color expression among existing displays and can express colors that are quite close to what can be seen with real eyes.

There has been fierce competition between Samsung Electronics and its domestic rival LG Electronics to take the upper hand in large premium televisions. LG has consistently accelerated the production of OLED panels, while Samsung has used quantum dots for high-end liquid crystal display (LCD) panels as a short-term strategy before moving to self-emitting displays. LG argued QLED TVs are structurally identical to LCD TVs because they have no separate self-emitting light source.

Quantum dots are semiconductor particles a few nanometres in size, having optical and electronic properties. Because quantum dots naturally produce monochromatic light, they can be more efficient than light sources which must be color filtered. Compared to liquid crystal displays which are backlit by fluorescent lamps or conventional white LEDs, quantum dot displays use blue-emitting LEDs as the light sources.

Samsung's business focus on quantum dot LED design changed in 2029 with a massive investment scheme to produce next-generation panels that use OLED to create blue light and a quantum dot layer to covert some of the blue into red and green. Samsung thinks QD OLED will provide a solution to the limitations of OLED panels, such as "burn-in" phenomenon.

Light generally has straightness, so its brightness and color look different depending on the viewing angle, but QD Display emits light uniformly in all directions. Samsung Display hopes its 34-inch QD-Display monitor will bring new changes to the monitor market as the best gaming display in all aspects such as color, image quality, and immersion.

Unswayed by the upcoming release of Samsung's new OLED-based TVs, LG was confident of its solid position in OLED, saying Samsung's entry would help expand an OLED ecosystem worldwide. "It is a positive sign that all companies acknowledge OLED,"  LG's Home Entertainment business Park Hyung-se said in a media event a day earlier.

"More than 20 major TV companies have joined the OLED camp now, and if Samsung Electronics joins for the last time, it will be a positive factor for the expansion of the OLED market and ecosystem," Park said. "Even if additional competitors enter, there will be no change in LG's marketing strategy."