Multi-purpose studio complex to be built for tentpole content production in S. Korea 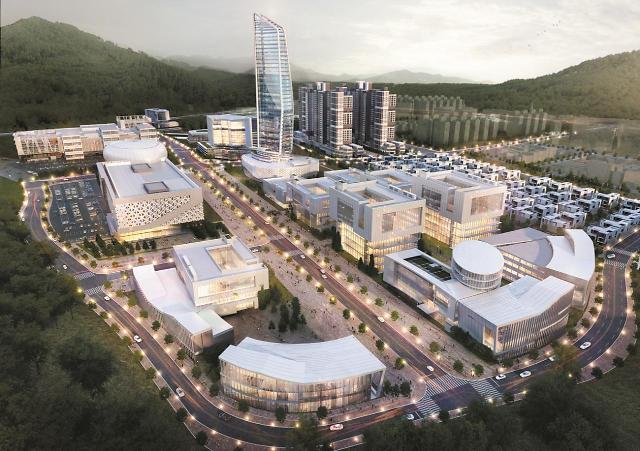 SEOUL -- In response to a surge in demand for tentpole content production mainly for over-the-top (OTT) service and metaverse platforms, South Korea's leading multi-purpose studio complex will be established in a new town that would house a K-pop cluster, a theme park, shopping malls and residential facilities in Uijeongbu, a satellite city north of Seoul.

When completed in 2025, the Immersive Digital Media Center (I-DMC) would become a hub for a content ecosystem encompassing the entire cultural industry such as movies, dramas, games, music, music videos, performances, and e-sports. Sequential investments have been made through YN Culture & Space (YN C&S), a joint venture between YG Entertainment, an entertainment powerhouse, and South Korea's top web portal operator and IT company, Naver.

I-DMC will have a total of five multi-studios, including one for visual effects (VFX), a process by which imagery is created or manipulated outside the context of a live-action shot in filmmaking and video production. The integration of live-action footage and computer CG elements to create realistic imagery is called VFX.

Wysiwyg Studios, a provider of video technology, and its subsidiary, NP, made a strategic joint investment of 10 billion won ($8.3 million) in YN C&S in April 2021, followed by Nexon, a South Korean video game publisher listed in Japan, with 15 billion won. Wysiwyg earmarked an additional 10 billion won.

I-DMC reflects Nexon's efforts to diversify its business portfolio and produce digital content. "We will strive to expand the competitiveness of our digital content industry by exerting synergy with partners in a rapidly changing media environment," Nexon Korea CEO Lee Jung-hun said on January 24.

Nexon has accelerated its content IP businesses through investment in the global entertainment sector including US toy giant Hasbro and AGBO, a U.S. film and TV production company led by Anthony and Joe Russo best known for their work in the Marvel Cinematic Universe, most notably Avengers.

Nexon completed a $400 million investment in AGBO on January 6, to become the second-largest shareholder with 38 percent. If requested by AGBO, Nexon will invest up to an additional $100 million in the first half of 2022 to accelerate the global expansion of its franchise IP in film and television.