S. Korean companies go ahead with hydrogen and ammonia project in Malaysia 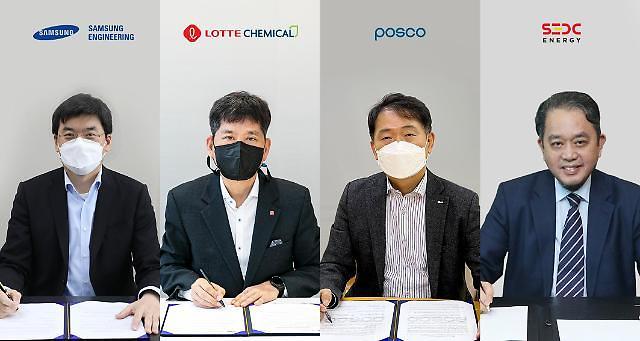 
SEOUL -- A consortium of South Korean and Malaysian companies will go ahead with the production of green hydrogen, green methanol and ammonia in Sarawak on the island of Borneo after consortium members confirmed the validity of development. It is linked to South Korea's green energy project aimed at achieving net-zero carbon dioxide emissions by 2050.

A memorandum of understanding on the H2biscus green hydrogen project in  Bintulu, a coastal town in the Malaysian state of Sarawak, was signed between SEDC Energy, a wholly-owned subsidiary of Malaysia's Sarawak Economic Development Company (SEDC), and three South Korea companies -- Samsung Engineering, Lotte Chemical and POSCO.

"As Sarawak is expected to be a key point in clean hydrogen production, we will successfully carry out this cooperation to introduce green hydrogen in South Korea and the transition to a hydrogen society," POSCO's hydrogen business head Cho Ju-ik said in a statement on January 26.

SEDC Energy aims to make Sarawak a hub for the ASEAN hydrogen energy market. Green ammonia and green methanol will be brought into South Korea, which is trying to establish a value chain that covers the production, transport, extraction and utilization of green ammonia.

Green methanol is a low-carbon fuel that can be made from either biomass gasification or renewable electricity and captured carbon dioxide. The production, storage, transportation and distribution of ammonia is less complicated than other ordinary fossil fuels and it can be used in almost every internal combustion engine and turbine.

Ammonia is produced through a chemical reaction between hydrogen and nitrogen at high pressure and temperatures of 450 degrees Celsius. Blue ammonia is produced in a low-carbon method using natural gas, but with the addition of carbon capture. Green ammonia can be produced through electrolysis powered by renewable energy. The decarbonization of ammonia production is an integral part of the global transition to net-zero emissions by 2050.

Together with state research groups and universities, Samsung Engineering and Lotte Chemical are involved in a government project to acquire core technologies through the demonstration of an ammonia-based green hydrogen production pilot plant. The Seoul government predicts annual hydrogen demand in South Korea will rise from 3.9 million tons in 2030 to 27 million tons in 2050. The proportion of green hydrogen is projected to stand at 50 percent by 2030.

In February 2021, South Korea's steel group POSCO partnered with the Hyundai auto group to develop green hydrogen manufacturing technology using ammonia. POSCO would develop technologies to extract large amounts of hydrogen from ammonia and supply green hydrogen to power stations and industrial facilities. POSCO's business model is to decompose water into electricity made of renewable energy to produce green hydrogen, synthesize it into ammonia, and extract hydrogen again from ammonia.