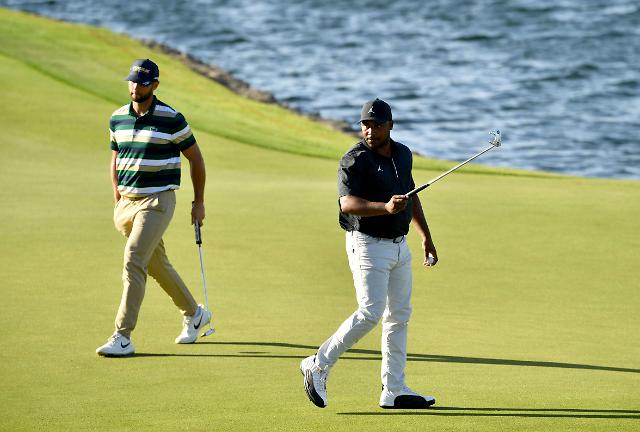 
SEOUL -- American golfer Harold Varner III has finished the third round of "PIF Saudi International powered by SoftBank Investment Advisors," the season-opening event of the Asian Tour, by birdieing the par-five 18th hole. The 31-year-old took the No. 1 spot on the leaderboard on the third day by finishing the round one stroke ahead of Adri Arnaus from Spain.

The two players had started the third round tied for the lead and went head-to-head for much of the day before the American returned a 68 to finish on 12 under while Arnaus carded a 69 at Royal Greens Golf and Country Club (par70, 7,010 yards).

"Really good pins today on 11 and 12. So I just did a good job of just slowing down and just doing my job. I love competing. I mean, it's the greatest thing in life is competing and just working at it," Varner III told reporters after the round on February 5. The American is zooming in on his biggest career success at the Asian Tour event with a total purse of $5 million.

Arnaus lost the "Acciona Open de Espana" in a sudden-death playoff last year on the DP World Tour and will go all out to secure his first big win in the pro game on February 6 "I just think that day by day we get the hang of how the course is playing, the same wind as yesterday, as far as velocity and direction," the 27-year-old said.

Thailand’s Phachara Khongwatmai, one of the Asian Tour’s rising stars, recovered from the second round’s 76 and came in with a 66, thanks to a birdie, birdie, eagle finish, to end three under. "The 76 was a shame. If not for that I could have been in contention, but I am learning all the time. I will try and go low tomorrow," said 22-year-old Phachara.