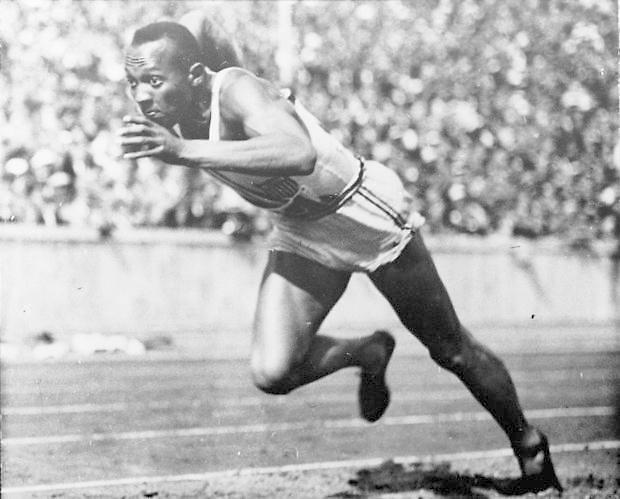 SEOUL -- Jesse Owens, dubbed one of the greatest track and field athletes in history, set an amazing record of the first four short-distance gold medals ever at the 1936 Olympics. He won gold medals in men's 100 meters, long jump, 200 meters, and 4 × 100-meter relay.

Owens' achievement shone even brighter as the successful African American sportsman came from a poor slave family background. He has dealt a blow to the Nazis who were trying to use the 1936 Olympic Games in Berlin for political purposes. He was credited for "single-handedly crushing Hitler's Myth of Aryan supremacy."

There was another reason to why Owens' achievement was the greatest ever. He had left great examples of fair play and sportsmanship. Owens was under heavy pressure when he was competing for the long jump event. He failed the first two attempts when he needed a distance of 23-and-a-half-feet to qualify for the final. Owens was clearly discouraged and German athlete Lutz Long walked up to the African American athlete.

In front of the Berlin crowd, the tall, blond and blue-eyed German long jumper approached Owens and suggested that the American athlete changes his mark and take off well before the foul line to avoid disqualification. Owens took Long's advice and jumped a distance of 25 feet on his final try to qualify for the final along with Long.

It was the harshest time when the United States and Germany politically confronted each other head-to-head. However, the fair play spirit displayed by Owens and Long moved the hearts of many people. The two athletes kept their friendship until their deaths.

In fact, the core aspect of the Olympic Games that overwhelmed and inspired people was not the medals or the stunning performances but it was the moments when athletes from all over the world sublimated their dreams and sweat into the Olympic spirit. The spirit of fair play and sportsmanship provided comfort to people who were living their everyday lives. Olympics was an event of peace and hope.

Because of the iconic spirit of the Olympics, the recent controversy over the decision of the Beijing Winter Olympics is very discomforting. First of all, fair judgment is paramount for athletes who have been aiming for the Olympics for the past four years. People expect the host country to sincerely respond and respond to various recent controversies. However, it cannot be denied that there are some groups that free ride on the Olympics to defile the spirit of the games. Especially some people involve fake news to raise the nation's anger and only shed light on players' efforts. It is regrettable that there are few voices calling for a calm and rational attitude to distinguish between disputes and protest if there is anything wrong.

Amid the unprecedented situation of COVID-19, South Korea has emerged as one of the most notable countries in the world. What many foreign media paid special attention to was "mature civil consciousness." Foreign media, including the Washington Post (WP), cited a higher level of citizenship as one of the keys to successful quarantine compared to other countries.

There were citizens who did not turn a blind eye to human rights that were violated even after decades of dictatorship and eventually won democracy. South Korea is developing into a country that is a model for numerous countries by building up the power of flourishing culture amid the economy and free system that has accumulated over the past few years.

This is reflected in the increasing favorability for South Korea in various international surveys. It is natural that anger rises over the dubious decision at the Olympics. However, if we fail to properly control our anger, we may bring about a mishap that can degrade our country's value.

In this respect, I am extremely proud of the mature attitude and unwavering composure shown by Hwang Dae-heon of the short-track speed skating team. In the end, Hwang won the gold medal by focusing on proving his ability without being swayed by anger.