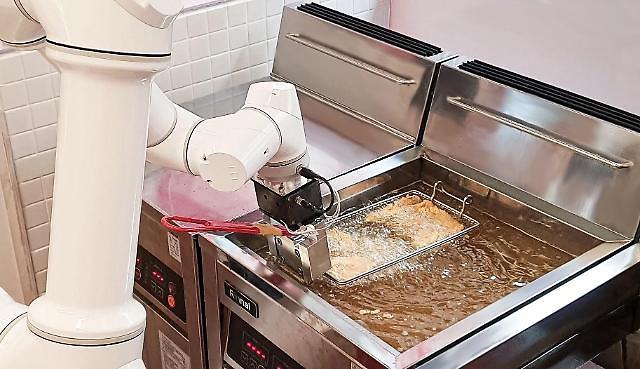 SEOUL -- A cooperative robot that cooks fried chicken will be demonstrated at South Korea's convenience store chain GS25. Human workers can focus more on their basic tasks including cleaning and customer services. The introduction of robots can secure convenience, safety, hygiene and uniform tastes.

GS Retail, the operator of GS25, partnered with Robo Arete to adopt a fried chicken cooking robot that can interact with human counterparts. The first robot will be demonstrated at a selected GS 25 store in April 2022. The use of robots will be expanded to other stores based on the analysis of user satisfaction, productivity and economic feasibility.

"In the era where automation systems are rapidly developing, the adoption of cooperative robots will be the starting point for many different smart auto systems that will be introduced in convenience stores in the future," GS Retail head Kwon Young-hwan said in a statement on February 23. Data released by Grand View Research, a global market research firm, showed that the global market for collaborative robots would reach $10.1 billion by 2025.