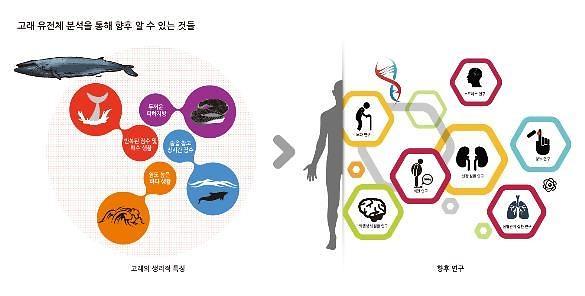 SEOUL -- South Korean researchers have used whale genes and protein structures to develop a new drug candidate substance that can treat non-alcoholic fatty liver disease (NAFLD), an umbrella term for a range of conditions caused by a build-up of fat in the liver. Related technology has been transferred to a private company for commercialization.

NAFLD is usually seen in people who are overweight or obese. Early-stage NAFLD does not usually cause any harm, but it can lead to serious liver damage, including cirrhosis if it gets worse. The new substance can be mass-produced at a lower cost while having better triglyceride reduction effects than existing bio proteins, according to the Ministry of Oceans and Fisheries.

Researchers from Ewha Womans University in Seoul and the state-run Korea Institute of Ocean Science and Technology (KIOST) recombined the genes of a bioprotein called "fibroblast growth factor (FGF)" using the whale's genome and protein structure to develop a new drug candidate that can reduce NAFLD, the ministry said in a statement on February 23.

The joint research team has transferred its technology to Doorco Korea. "We will prepare and promote various support measures so that useful materials in marine life can be developed and commercialized," Hong Jong-wook, a ministry official in charge of marine policy, was quoted as saying.