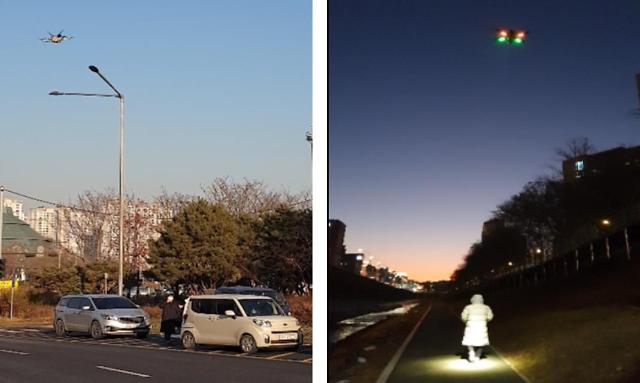 
SEOUL -- Seoul City has started the demonstration of two smart poles equipped with surveillance drones for the first time in the country. The drones will monitor illegal parking and traffic congestion. Smart poles will provide a charging station for drones.

"We plan to operate two drones twice a week after a test run," Seoul's smart city policy bureau official Lee Sang-beom told Aju Business Daily on March 2. Two drone smart street poles equipped with drones were built in the southern Seoul district of Seocho in January 2022 and they will be demonstrated until May. Two homemade drones will be mainly operated twice a day to detect illegal parking and monitor traffic jams. The manually controlled drones will tell drivers to move their cars using loudspeakers.

The all-in-one smart pole is integrated with various equipment such as a CCTV camera, WiFi router, drone station and IoT sensors. Seoul said that the integration of equipment will help the city reduce operational costs and improve the aesthetics of streets. According to Lee, the city government is preparing a safe nighttime home guide service for working women. Currently, South Korea regulates the operation of drones after sunset.

Operating drones without permission is illegal in many urban areas including Seoul as it poses a risk of violating people's privacy. Illegal drone flights can also cause severe damage to airplanes. Lee said that drones can be exempted from such regulations after the demonstration is completed without any safety accidents.

Since 2020, 149 smart poles have been installed in South Korea. Seoul plans to install 131 more smart street poles by the first half of 2022. According to Seoul, all-in-one smart poles can save up to 12 percent in operating expenses. Various global companies are focusing on the adoption of smart poles as part of the smart city project. In July 2021, a smart pole was adopted in Coral Gables, Florida, for the first time in the United States. In June 2021, smart energy platform operator Omniflow developed a technology to turn streetlights into multifunctional smart poles that can charge electric vehicles and provide public Wi-Fi access.