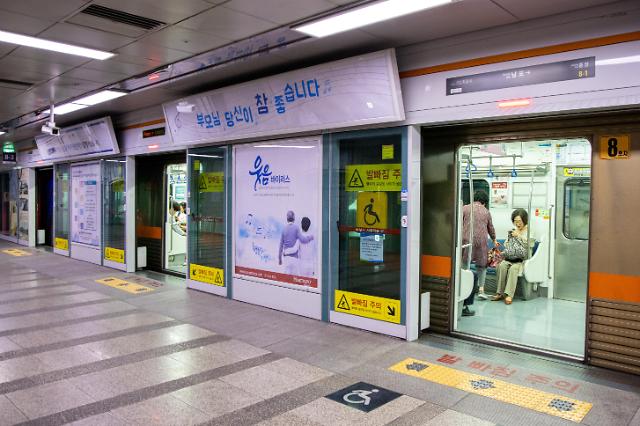 Safety screen doors automatically open when a train arrives at a platform and close just before the train leaves. According to data released by Seoul, an annual average of more than 30 lives were lost on the capital city's subway platforms due to safety accidents and suicide before the protective doors were adopted in 2006. However, the suicide rate has significantly decreased after the adoption.

"After the adoption of safety screen doors in every Busan subway station in 2016, there was no suicide case," Busan Transportation Corporation's budget management bureau head Lee Kyoung-min told Aju Business Daily on March 4. Busan will also improve other outdated subway station facilities including elevators and electronic devices. Busan with a population of some 3.4 million has a total of six subway lines that stretch over 205.6 kilometers (128 miles).

Because Busan is South Korea's second-largest city with many mountains, subway trains play a crucial role in helping citizens commute. Busan City's urban railroad bureau official Lee Ji-yun said that the city's public transportation system was not very efficient before the city's first subway line was operated in 1985 because of small mountains scattered across the city. Busan's subway train infrastructure has not been upgraded much for the last 37 years.

A total of 688.3 billion won ($560 million) will be injected to upgrade the safety of the city's urban railways. Busan mayor Park Heong-joon said the city will greatly improve the safety management capability of subway trains by eradicating the sources of serious civil and industrial accidents.