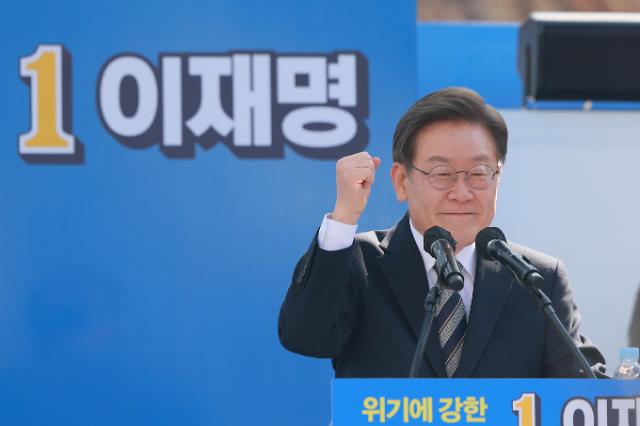 
SEOUL -- Lee Jae-myung is a former human rights lawyer who has built his administrative career serving as city mayor and provincial governor to become a ruling party presidential candidate. He has inherited the liberal political philosophy of the late president Roh Moo-hyun who pushed for inter-Korean rapprochement, economic justice, and fundamental reform in South Korea's legal system.

In an election pledge booklet, Lee said the March 9 presidential election should become an opportunity for both liberal and conservative voters to muck in and create a greater country. "I will expand the area of people's basic rights and protect each citizen's livelihood," he said, stressing that the government's role is to solve everyday problems such as housing and employment.

"I will become the commander to overcome the current crisis," Lee, 57,  said, promising to address concerns about public health, economic, social, and climate change. He confidently said that any conflict or misunderstanding can be solved through frank communication.

His time as an administrator is best recognized for his successful work of clearing restaurants that had illegally occupied sightseeing spots in protected areas including river valleys and mountains. For decades, such restaurants have damaged environments and charged excessive street taxes and expensive food prices for vacationers.

Before Lee was elected as the governor of Gyeonggi Province in 2018, the local government had tried to purge illegally operated shops for many years but the dispute between the administration and store owners normally ended up in physical conflicts, sometimes resulting in violent demonstrations. Lee, who is an animal rights advocate, succeeded in persuading store owners to voluntarily remove illegal buildings and equipment from the protected area.

Instead of minding big affairs that can catch people's eyes, Lee fancied himself as a political minority in his party and tried to solve problems related to the actual lives of ordinary people. He stopped the illegal butchering and selling of dog meat at a traditional marketplace in Seongnam, a southern satellite city of Seoul, by persuading dog meat restaurants owners for five years.

Lee's effort to communicate and sympathize with people in trouble mainly comes from his experience as a child worker. He grew up as the seventh son of a very poor family of nine children and gave up education to feed his family while working at factories. He suffered permanent damage to his body during his time in child labor. He lost his sense of smell while working at a painting workshop. His left wrist was crushed by press machinery, but he could not receive proper treatment.

Through self-study, Lee received both middle and high school equivalency diplomas. He attended Chung-Ang University, where he earned his law degree in 1986, and later became a human rights and labor lawyer after being influenced by Roh who served as president between 2003 and 2008.

Lee attempted to kill himself twice due to the hardships of life. Based on his experience of being forced into a corner with no signs of hope, he proposed programs for youngsters to help manage their emotions and mental health, provide basic information about financial systems, and help them get jobs.

As a presidential candidate, Lee adopted "To turn crisis into an opportunity" as one of his main slogans and promised to become a leader who will stand strong in times of crisis and stand by those who are weak and in need of help.

Lee believes that a universal welfare system will improve the livelihood of every South Korean, especially the underprivileged. "I always wanted to go to school and wear school uniforms. That is why I provided free uniforms to students in Seongnam," he said at a TV debate. While serving as the mayor of Seongnam City from 2010 to 2018, Lee provided free fresh fruits to kindergartens and prep-schools, thinking of childhood memories.

Lee opposed political arguments unrelated to people's lives. He would do so by purging all forms of unfairness including political corruption and social irregularities. If elected, he pledged to lower soaring housing prices by releasing more than 3.1 million new houses, create some three million jobs in the digital, energy and social service sectors to support young generations, and accelerate digital transformation.

Lee also revealed a blueprint to turn the country's fossil fuel-based economy into a carbon-neutral and climate-friendly one by accelerating the adoption of renewable energy and an "energy highway system" that will efficiently send green energy to every part of the country. For a "great energy turnaround," he proposed the creation of a new climate and energy ministry.

Other pledges include steps to resolve economic woes caused by a coronavirus pandemic through an injection of some 50 trillion won ($40.4 billion) and a system that limits the maximum level of monthly rental fees and wages in case of natural disasters and epidemics.