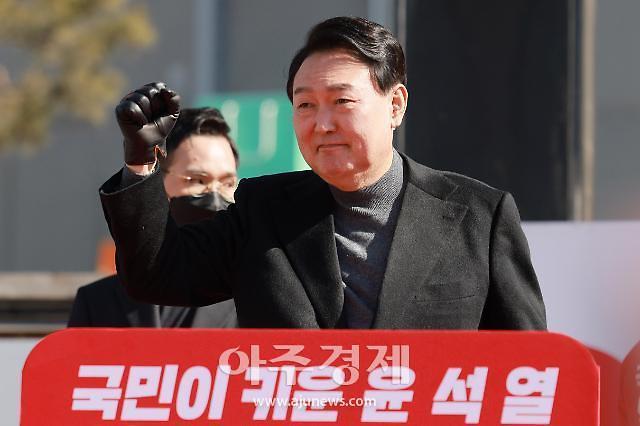 SEOUL -- Yoon Suk-yeol is an unpliable political novice who started his political career just months after he resigned as South Korea's chief public prosecutor in March 2021 at the height of his unbending rejection of a presidential order to reform the hierarchical structure of his organization.

Born in Seoul in 1960 to a relatively wealthy family, Yoon studied law at Seoul National University. His father was a statistics professor at Yonsei University. During his school days, Yoon participated in a mock trial and sentenced Chun Doo-hwan, a former general who seized power through a coup and ordered a bloody crackdown on a pro-democracy uprising in the southern city of Gwangju in 1980, to life imprisonment. Yoon passed the bar exam on his ninth try in 1991.

Yoon, 61, gained prominence for leading investigations into a massive corruption scandal that saw millions of citizens taking to the streets to impeach and oust ex-president Park Geun-hye. He was promoted to the position of prosecutor-general after President Moon Jae-in took office in 2017, but he kept his distance from power, adhering to principles.

As prosecutor general, Yoon had been at odds with Moon and his men from the ruling Democratic Party and led investigations into the president's inner circle. The antagonistic relationship with Moon drew unexpected support from the conservative circle, especially from followers of the main opposition People Power Party.

Yoon tendered his resignation in March 2021 and jumped into the presidential race three months later. After being nominated as the presidential candidate of the opposition party in November 2021, Yoon portrayed himself as the "symbol of fairness" and vowed to dig into what he called "deep-rooted evils" in the Moon administration if elected.

Political opponents have pounced on Yoon's lack of knowledge. At a TV debate in February, he could not answer when asked about Renewable Energy 100 (RE100), an initiative seeking to source 100 percent of electricity consumption from renewables and accelerate change towards zero-carbon grids.

Yoon showed a hardline stance on North Korea, raising the idea of launching a preemptive strike in the event of an imminent cross-border threat and allowing the deployment of additional units of an American missile shield called "Terminal High Altitude Area Defense (THAAD)" that triggered a diplomatic row between Seoul and Beijing.

The former prosecutor supported economic support for North Korea on a reciprocity principle, the resumption of nuclear talks through a three-way dialogue channel involving Seoul, Washington and Pyongyang, and U.S.-led international sanctions until the North completes denuclearization.

Yoon accepted the foreign policy of conservative groups by emphasizing a strong security alliance between Seoul and Washington, but he heralded rough relations with Beijing by saying South Korea and China show a clear difference on security concerns and the denuclearization of North Korea. He vowed to repair Seoul's soured relations with Japan based on a future-oriented partnership.

Yoon advocated the abolition of the Ministry of Gender Equality, saying it has failed to improve equality and popularized the idea of treating men as potential criminals.

Yoon revealed a pro-business stance and promised to give more leeway to private companies while cutting red tape and abolishing unnecessary regulations. Soaring housing prices have been a key domestic issue. Yoon pledged a sufficient supply of homes by easing regulations and lowering capital gains and property ownership taxes.