S. Korea goes ahead with presidential election despite COVID-19 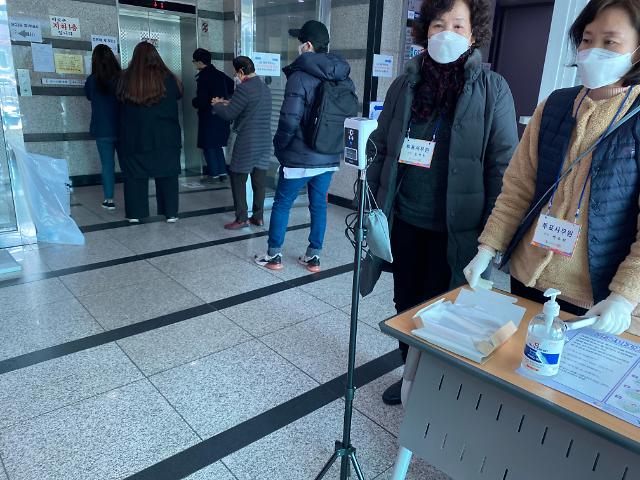 SEOUL -- It's like a quiet museum hallway with a dozen people standing in an orderly manner and wearing face masks and disposable gloves to prevent the spread of COVID-19 as they wait for their turn to cast ballots. Mixed emotions were clearly seen in their eyes to pick their favorite who will become South Korea's next president for a five-year term.

The polling booth in southeastern Seoul was very quiet about 1:00 p.m. (0400 GMT) on March 9 with voters walking in and out as if they were on a conveyor belt. Some voters stood relaxed and laidback, but others showed faces full of stern will.

Officials from the National Election Commission (NEC), a state election watchdog, were busy checking body temperatures and guiding voters one by one into the building. Quarantine officials frequently walked around with a disinfectant spray to sterilize an elevator and doorknobs. Hand sanitizers and disposable gloves were provided.

"I think one of the flowers of democracy is the right to vote," Shin Jung-woo, a 33-year-old salaryman in Gangdong District, told Aju Business Daily. "I know it is basically impossible to completely get rid of corruption but I hope the future government controls the rate of corruption to a lower level."

Voters were largely reluctant to disclose their political tendency. Kim Yi-tae, a 60-year-old private business operator, urged the older generation to prevent South Korea from falling behind other leading countries in the global race. He predicted that it would take at least 10 years to restore what was lost.

"I came to vote because of the incompetence and unfairness of the current administration," Kim said. "I wanted to make things right for our descendants. I will vote while praying for the future of South Korea."

Lee Yu-jin, a 20-year-old university student, expressed hope for a more fair society. "I came to vote because I wish to live in a society that is not exclusive for the privileged but a fair one where everyone can equally fulfill their dreams," she said, adding that she thinks the right to vote is a duty of a South Korean citizen.

The rate of pre-poll voting was about 36.93 percent, which is the highest turnout since 2014 when the early-voting system was first adopted. According to South Korea's national election commission, more than 16 million voters participated in the pre-poll voting on March 4 and 5. The actual voting started at 6:00 a.m. at 14,464 polling stations nationwide.
​
Those who tested positive for COVID-19 can vote after 6:00 p.m. when all uninfected voters leave polling stations. The NEC said vote counting would start around 8:10 p.m. The announcement of the results of the first early-voting box in the jurisdiction was expected to be at 9:00 p.m.