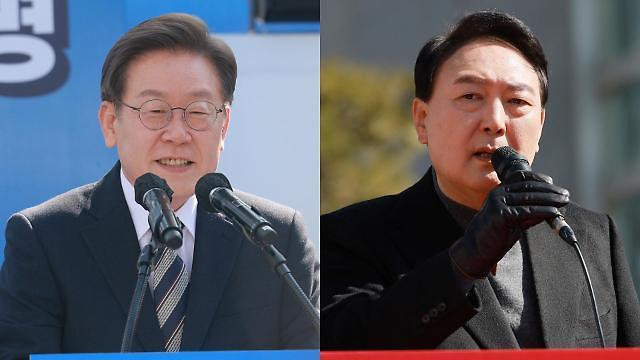 Yoon of the conservative main opposition People Power Party is predicted to win 48.4 percent by a narrow margin of 0.6 percent over Lee of the ruling Democratic Party who is expected to collect 47.8 percent, according to a joint exit poll conducted by three main broadcasters -- KBS, MBC and SBS.

A separate exit poll from JTBC, a pay television network, showed Lee leading with 48.4 percent against Yoon's 47.7 percent. The race to pick the successor of President Moon Jae-in has been tightly contested with pre-ballot surveys showing Yoon and Lee running neck and neck within the margin of error.

Voter turnout was at 77.1 percent, slightly down from 77.2 percent recorded in the previous presidential election in 2017, according to the National Election Commission (NEC). Out of  44.2 million eligible voters, 34 million have cast their ballots at 14,464 polling stations.

The preliminary tally included more than 16 million ballots, which were cast in the two-day early voting that began on March 4. Pre-ballot surveys showed Lee and Yoon running neck and neck within the margin of error.