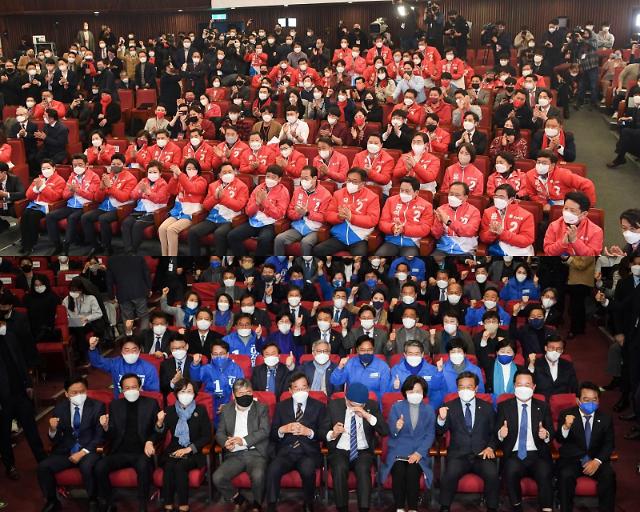 This combo-photo image shows lawmakers from the opposition People Power Party (above) and the ruling Democratic Party (below) shortly after exit polls were unveiled after a tightly contested presidential race. [Photograph by Yoo Dae-gil = dbeorlf123@ajunews.com]


SEOUL -- Low murmuring of voices and bustling of jackets filled two separate theaters where South Korean ruling and opposition party lawmakers gathered to watch the counting of ballots after exit polls showed split results. The race has become too close to predict.

Members from the ruling Democratic Party (DP) and the conservative opposition People Power Party (PPP) largely remained calm and whispered to each other with serious faces. Some smiled and patted fellow lawmakers' shoulders to show signs of gratitude for efforts they had put into election stumping.

Chat windows of YouTube live channels that broadcast exit polls were suddenly filled with supporting messages of the two candidates. Some supporters shouted in confidence "We have won!!!" while others called for restraint.

The election was held amid a coronavirus pandemic that had put South Korea onto a sluggish march to normalization. People showed mental and physical fatigue over prolonged social distancing while private business operators complaint of low income as people used online stores instead of visiting offline shops.

Lee is a former human rights lawyer who has built his administrative career serving as city mayor and provincial governor to become a ruling party presidential candidate. He has inherited the liberal political philosophy of the late president Roh Moo-hyun who pushed for inter-Korean rapprochement, economic justice, and fundamental reform in South Korea's legal system.

Yoon is an unpliable political novice who started his political career just months after he resigned as South Korea's chief public prosecutor in March 2021 at the height of his unbending rejection of a presidential order to reform the hierarchical structure of his organization.