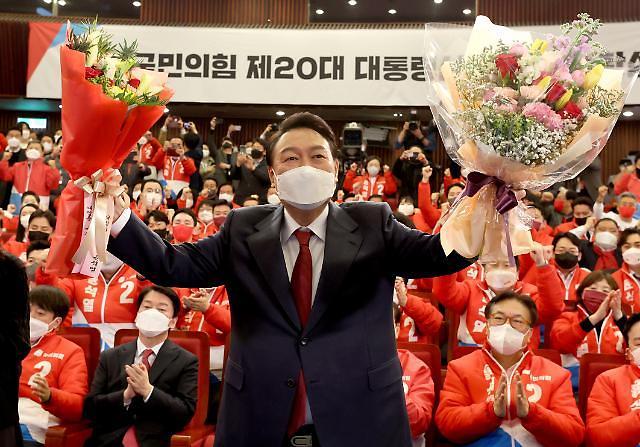 SEOUL --  Yoon Suk-yeol, a prosecutor-turned politician from South Korea's conservative main opposition party, vowed to put national unity as the top priority of his policy after he was elected as president in a thrillingly close race that revealed a gap between generations, genders and regions.

It was the closest race in South Korea's election history with Yoon coming from behind to defeat Lee Jae-myung by a margin of 0.73 percent. After ballot counting was completed, Yoon from the People Power Party garnered 48.56 percent, while Lee of the ruling Democratic Party collected 47.83 percent. The opposition candidate overtook Lee after 51 percent of the vote was counted.

"I will put my top policy priority on national integration," Yoon, 61, said in a speech of victory before supporters after Lee conceded defeat about four hours after midnight. He promised to make a fair society during his five-year term that will begin on May 10.

"It is a voice of reform to correct the fairness and common sense of this country, and an earnest public appeal for the politics of integration without dividing the people. It's a stern order to create a new country of hope," Yoon said in his first news conference as president-elect.

With his emphasis on rule by common sense, Yoon said his administration would stick to liberal democracy and market economy and open an era of "integration and prosperity" while keeping away from any forces or ideologies that threaten liberal democracy. "I will firmly adhere to the principle of rule of law that applies fairly to all Koreans and sternly deal with the corruption that threatens democracy."

There will be no dramatic policy shift in economic, social and other domestic issues as Moon's ruling party controls a majority of parliamentary seats, but Yoon's victory heralds inevitable adjustment in foreign policy.

Yoon showed a hardline stance on North Korea, raising the idea of launching a preemptive strike in the event of an imminent cross-border threat and allowing the deployment of additional units of an American missile shield called "Terminal High Altitude Area Defense (THAAD)" that triggered a diplomatic row between Seoul and Beijing.

"I will build a strong defense power that can reliably suppress any provocation. We will firmly deal with North Korea's illegal and unreasonable actions in accordance with principles, but leave the door to inter-Korean dialogue open at any time," the president-elect said.

The former prosecutor has supported tough U.S.-led international sanctions until North Korea completes denuclearization, calling for a predictable denuclearization roadmap under a reciprocity principle, as cross-border tensions remain hard due to a stalemate in denuclearization talks and defiant missile launches.

Yoon has accepted the foreign policy of conservative groups by emphasizing a strong security alliance between Seoul and Washington, but he said South Korea and China showed a clear difference in security concerns and the denuclearization of North Korea. He has supported South Korea's participation in the working groups of the Quadrilateral Security Dialogue (Quad), a U.S.-led regional forum that includes Australia, India and Japan.

"We have the task of strengthening our global diplomatic capabilities amid growing North Korean nuclear threats and tensions in the U.S.-China strategic competition," Yoon said, adding he would rebuild South Korea's traditional alliance with the U.S.

The opposition party has advocated amicable relations between Seoul and Tokyo based on a tripartite security alliance involving South Korea, Japan and the U.S. to cope with an unpredictable situation caused by Washington's intensifying rivalry with Beijing and Moscow.

"I will develop Korea-China relations of mutual respect and create a future-oriented Korea-Japan relationship," Yoon said. "What is important is the joint interests of South Korea and Japan and the future of the two countries."

Yoon said welfare cannot be sustained without growth. "Sustainable development is possible only when growth and welfare are in a fair and virtuous cycle." He has revealed a pro-business stance and promised to give more leeway to private companies while cutting red tape and abolishing unnecessary regulations.