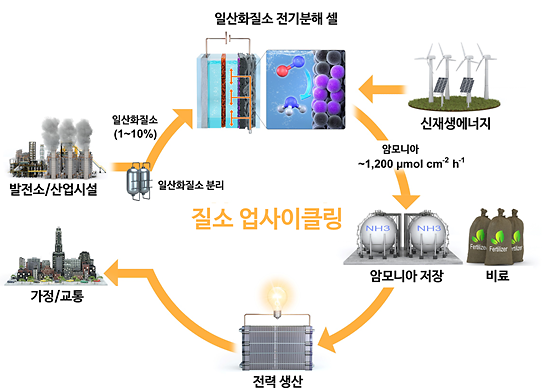 Nitric oxide  (NO) is a colorless gas that is very toxic when inhaled. Industrial plants have special retrieval equipment installed in chimneys and burners to reduce the emission of greenhouse gas. Nitric oxide is also one of the main precursors that create particulate matter, microscopic air pollution particles also known as fine dust. Some 146,000 tons of nitric oxide was released into the air in South Korea in 2020, according to the Ministry of Environment.

A joint team of researchers from the Korea Advanced Institute of Science & Technology (KAIST) and the Ulsan National Institute of Science and Technology (UNIST) has developed a highly efficient electrochemical system that produces ammonia using nitric oxide. They achieved the world's top-class production speed of 1,236 micromole per square centimeter per hour, which is about ten times more effective than conventional electrochemical methods, by processing compressed nitric oxide gas.

"If we develop a special method that can effectively separate the greenhouse gas from other gases emitted from industrial plants, we can upgrade the ammonia production system so that it can reduce the emission of greenhouse gases from factory chimneys," KAIST researcher Chun Sung-jung told Aju Business Daily on March 24.

Ammonia, which is a compound of nitrogen and hydrogen, is seen as an ideal resource to establish an eco-friendly hydrogen fuel cell-based infrastructure. It is also seen as a suitable ship fuel due to its stability in supply and relatively easy storage and transportation.