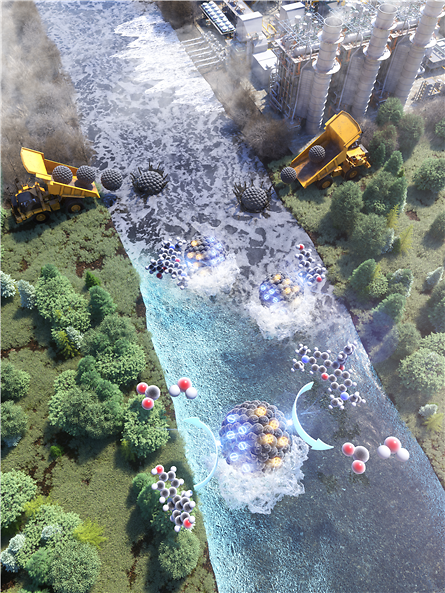 SEOUL -- South Korean researchers have developed a technique that can be used to collect ambient energy and power nanocatalysts capable of removing air or water pollution. Piezoelectricity was used to create energy from mechanical movements such as the movement of floor tiles.

Piezoelectric energy harvesting is a convenient method to collect ambient mechanical energy and convert it into electricity. Piezoelectric devices do not need a separate voltage source and their structure is very simple. In 2021, the southern port city of Busan embarked on a project to develop a piezoelectric generator system. The road surface generator creates electricity when heavy trucks drive over them. Created electricity is be stored in batteries.

The National Research Foundation of Korea (NRF) said that its research team has created a nanocatalyst made of barium titanate (BaTiO3). The piezocatalyst has oxygen vacancies which are positive electric charges within the crystalline structure of oxide structures. Oxygen vacancies dope acceptor ions with a negative electron charge and form electric dipoles. The catalyst powered itself by collecting mechanical energy from flowing water.

Researchers found that when the BaTiO3 nano piezocatalyst collected energy, it was able to remove toxic materials -- bisphenol A and rhodamine B. The new piezoelectric catalyst was about 4.3 times more effective than conventional nanocatalysts.