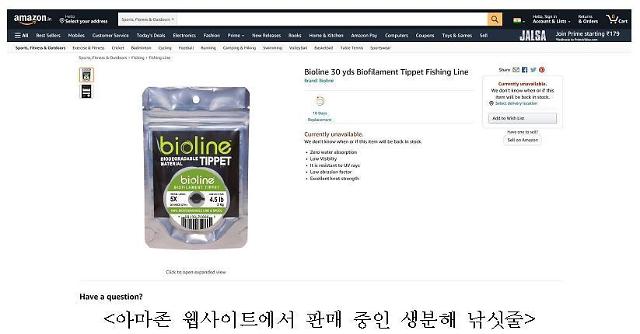 SEOUL -- Fishing lines made of biodegradable plastic thread produced by a South Korean company are on sale in the United States through Amazon and other channels. Biodegradable fishing lines contribute to preventing marine pollution and ghost fishing, an aquatic phenomenon in which animals get caught by nylon nets that were abandoned or lost.

Because of their extremely tough characteristics, fishnets made of nylon become "ghost nets" that damage fish stock and vessels. Abandoned or lost ghost nets can destroy underwater habitats such as coral reefs and benthic fauna, which are common spawning grounds for marine animals. Sometimes, divers lose their lives after being tangled up by ghost nets.

The Ministry of Oceans and Fisheries has teamed up with the National Institute of Fisheries Science, a state scientific body, to develop biodegradable nets that naturally decompose into carbon dioxide or water in the sea. Patent technology for manufacturing high-quality biodegradable fishing nets has been transferred to Ancor Bioplastics, a biodegradable plastics company that produces 350 tons of biodegradable thread every year.

The company started exporting its product in January 2022 at the request of U.S. fishing line vendors. "Through this export, South Korea's biodegradable fishnet twine technology has been certified as a leading technology for the protection of the marine ecosystem," Choi Yong-seok, a ministry official in charge of fishery resource policy, said in a statement on March 30.

Biodegradable fishnets produced in South Korea are made of PBEAS, a novel biodegradable thermoplastic polymer. The replacement cycle of new biodegradable nets is about one year, which is shorter than that of nylon used for two years, but new nets are about 10 percent tougher and 20 percent more flexible than previously developed prototypes.