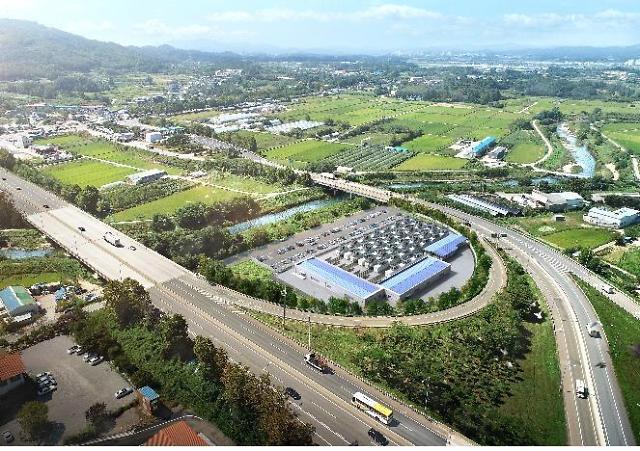 
SEOUL -- South Korea's expressway operator has started the construction of a fuel cell power generation facility on an idle space near a highway interchange. The facility to be in operation by December 2022 will generate enough electricity to power some 12,000 households for a year.

South Korean firms and organizations are utilizing idle spaces to set up renewable energy sources such as wind farms and solar power generators. Factory rooftops are the most popular spots for solar power generation. In October 2021, Korea Hydro & Nuclear Power, the state operator of nuclear power plants, built a 1.3 megawatt-class solar power plant on the rooftop of its headquarters building in Gyeongju some 270 kilometers (167 miles) southeast of Seoul. The rooftop facility can power about 10,000 households per year.

Korea Expressway Corporation (ex) said in a statement on April 4 that the company partnered with Korea East-West Power, a state power company, to build an 8.1 megawatt-class fuel cell generation facility near an expressway interchange in the southern port city of Ulsan. On an idle land of about 8,200 square meters, the state electricity company will build a hydrogen-based power facility to generate a total of 66 gigawatt-hours of electricity per year.

"We will become the pioneer in energy transition and carbon reduction by making a foray into a renewable energy business that uses idle spaces," ex said, adding that the expressway operator will generate renewable electricity enough to power all expressway facilities by 2025.