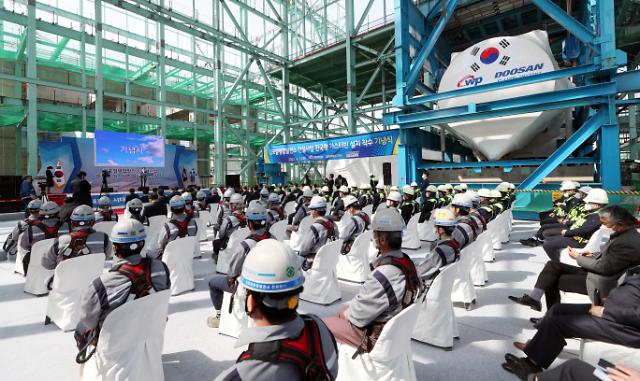 
SEOUL -- Faced with an inevitable change in the political environment, Doosan Enerbility took a composed posture, awaiting a national energy roadmap to be drawn up anew by South Korea's next leader Yoon Suk-yeol after putting aside its reputation as the designer of the country's first homemade H-class gas turbine capable of producing some 270 megawatts of electricity.

Doosan Heavy Industries & Construction changed its name to Doosan Enerbility on March 29 with renewed determination to solidify its status as a key player in South Korea's power industry. The move came three weeks after Yoon scored a narrow victory in presidential voting.

Unlike President Moon Jae-in who has prioritized the establishment of infrastructure for renewable energy sources and a hydrogen economy during his five-year term, Yoon vowed to revitalize South Korea's struggling nuclear power industry, criticizing Moon's "nuclear-exit" policy of phasing out nuclear power plants.

Doosan Enerbility is certain to be the main beneficiary of Yoon's energy policy, but the company has apparently kept a low profile in corporate publicity to avoid being caught up in political controversy over the properness of any drastic modifications to South Korea's long-term energy roadmap.

During Moon's tenure which ends on May 9, Doosan has adopted a new survival strategy by diversifying its business structure into offshore wind power, small modular reactors, and hydrogen. However, its technical advance shined out in a ceremony on April 5 to put the 270-megawatt turbine into field operation at a combined heat and power station in Gimpo, the western satellite city of Seoul.

The turbine will go through demonstration by 2025 at the cogeneration plant run by Korea Western Power that generates electricity first with a liquefied natural gas turbine and uses waste heat to drive a steam turbine. "We hope that the construction of a Korean-style gas cogeneration power plant will serve as an opportunity to revitalize the ecosystem of the domestic power generation industry," said Korea Western Power CEO Park Hyung-duk.

South Korea is the fifth country to run a giant gas turbine after the United States, Germany, Japan and Italy. Policymakers have described independence in gas turbine technology as an important task in terms of energy security because all 161 gas turbines operating at power plants in South Korea were from overseas companies.

Advanced combined cycle plants offer improved operating flexibility with faster start times. An H-class combined cycle power plant uses both a natural gas turbine and a steam turbine to achieve high efficiency and low emissions. By combining electrical output from both turbines, the H-class system produces more than 410 megawatts of electricity at more than 60 percent efficiency. H-class turbines can start up quickly and vary their output in just minutes while maintaining higher efficiency and reduced emissions.

South Korea has presented a goal to commercialize a 300MW hydrogen gas turbine by 2040. As a bridge power in energy conversion, the government aims to commercialize mixed combustion technologies that burn more than 30 percent of hydrogen with natural gas by 2035.

Utilizing its know-how in designing the 270MW H-class model codenamed "DGT6-300H S1," Doosan has presented a goal to develop a 380MW model. In February 2022, the company teamed up with KEPCO E&C, a domestic power plant design and engineering company, to develop an eco-friendly turbine burning hydrogen extracted from ammonia.

Ammonia is seen as an ideal resource to establish an eco-friendly hydrogen fuel cell-based infrastructure. KEPCO E&C is in charge of developing overall power plant engineering technologies, while Doosan will develop key components of a hydrogen turbine and ammonia reforming facilities.