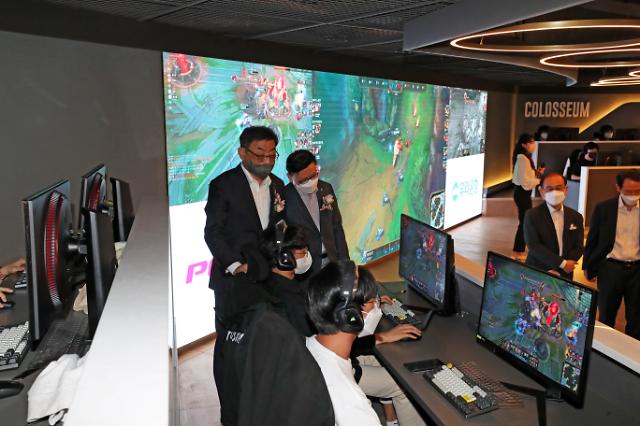 
SEOUL -- A prominent engineering and science school in South Korea's southeastern port city of Pohang opened an e-sports pub where students can compete with other collegians at home and abroad or watch sports games while having light meals. It is a metaverse facility that 50,000 people around the world can access at the same time.

Pohang University of Science and Technology (POSTECH) is the only Korean university to have a sports pub called "Colosseum" which is designed for students to hold e-sports competitions and enjoy sports games and concerts vividly.

The e-sports pub is part of POSTECH president Kim Moo-hwan's scheme to expand the university campus onto a metaverse world so that students can freely enjoy various activities. The metaverse is a digital world generated by the convergence of physical reality and virtual spaces where users can have hands-on experiences through avatars.

"The e-sports Colosseum is the first monument to our journey to 'Metavercity and Amusement POSTECH,'" Kim said at a completion ceremony on April 6. His challenge has been sponsored by Woori Bank, which has actively supported the play culture of MZers as the title sponsor of the League of Legends (LOL) Champions Korea (LCK). For 11 days from April 18, POSTECH is to host a LOL competition.

"I hope that the talented people of POSTECH will be able to play freely and enjoy various experiences on the stage of the e-sports Colosseum built between the metaverse and real world," Woori Bank head Lee Won-duk said, promising to actively encourage the students' play culture based on e-sports and expand the base of e-sports.

POSTECH has been in the vanguard of carrying out innovative experiments. In May 2021, the school opened a lecture room that used advanced technologies such as virtual reality, augmented reality and mixed reality (MR) to implement non-contact lectures and experiments without the actual presence of students. Theoretically, there are no space restrictions, so lectures and classes can be held anytime, anywhere.