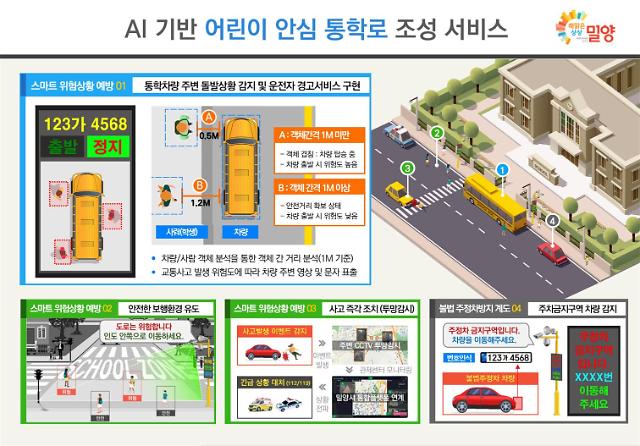 SEOUL -- A southern city of Miryang will demonstrate safe pedestrian zones for students using artificial intelligence-based pedestrian detection technology. The system will inform drivers by showing warning signs on display boards if a pedestrian is nearby.

Miryang City said in a statement on April 7 that the city will install the AI-based pedestrian detection system at four bus stops near an apartment complex. The system will analyze video images filmed by closed-circuit television (CCTV) cameras in real-time and warn drivers through electronic display boards installed at bus stops. The AI system can also warn pedestrians on the road through verbal announcements. Illegal parking can be detected using CCTV cameras.

"About 1,360 traffic accidents took place nearby the demonstration zone between 2018 and 2021," Miryang spokesperson Paik Jung-hee told Aju Business Daily on April 7. According to Paik, there were many cases where children were severely injured by vehicles.

"Through a 1 billion won ($820,000) state project, we will demonstrate the pedestrian accident prevention system by the end of 2022. We will upgrade technologies depending on the result," Paik said, adding that she expects the demonstration will significantly reduce the number of accidents. "Police and firefighters will be informed right away in case of a traffic accident through the system."

CCTVs are also used to detect violence and other abnormal activities. In May 2021, Seoul chose to increase the number of smart street poles equipped with AI-based surveillance cameras that will automatically turn to face the direction where strange sounds are made.