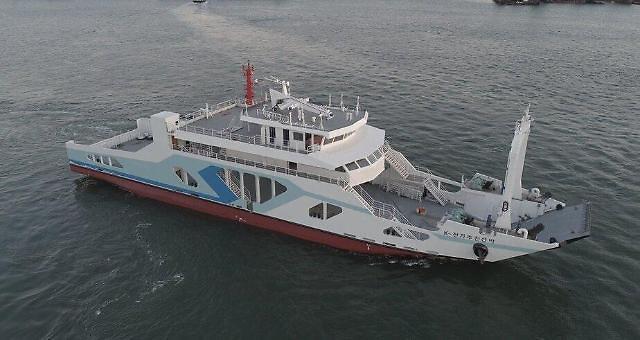 South Jeolla Province said in a statement on April 12 that the province was selected by the Ministry of Oceans and Fisheries to develop renewable energy-based passenger ship technology. Solar and wind power-based ships will be standardized. A total of 26 billion won ($21 million) will be invested by 2026.

Since 2020, the southern province has been focusing on the development of electric propulsion ships with the state-funded Korea Research Institute of Ships and Ocean Engineering (KRISO), private companies and other research institutes. In March 2022, a 420-ton electric propulsion passenger ship capable of transporting cars and cargo together was showcased in the southwestern port city of Mokpo. The vessel can carry about 20 vehicles and 120 passengers.

Various South Korean shipbuilders are also developing green technologies for ships. In December 2021, domestic shipbuilder Vinssen demonstrated South Korea's first hydrogen-electric boat that can operate for about 6 hours at 18.5 kilometers (11.5 miles) per hour only with a 40-minute charge of a fuel cell module weighing about 18 pounds. The company is currently building hydrogen fuel cell infrastructure in Singapore by teaming up with the Singaporean office of Bureau Veritas Marine, an agency specializing in inspecting marine safety.