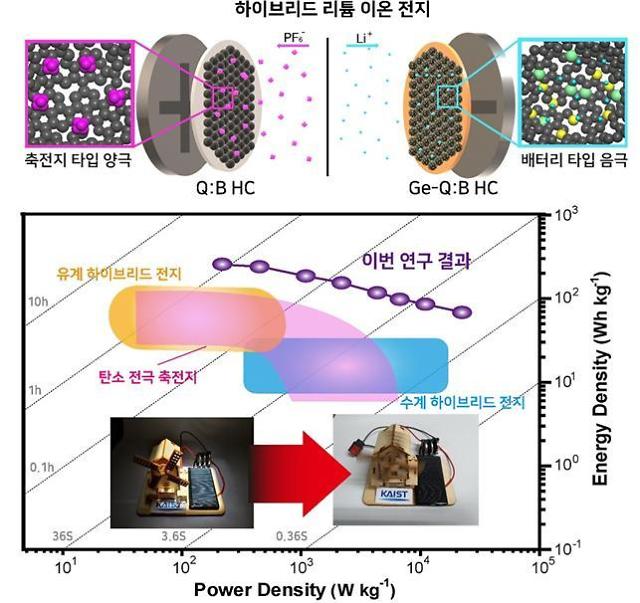 SEOUL -- South Korean researchers have developed a high-energy, high-output hybrid lithium-ion battery that can be charged at a lightning speed. The super-fast-charging battery can be utilized in many fields including electric vehicles, drones, and other smart devices.

Lithium-ion batteries are one of the most used in the world. Lithium-based batteries are lighter and smaller in size compared to other battery types, contributing to the miniaturization of portable devices including smartphones, tablet PCs, and wearable devices.

However, their charging speed has been a problem, especially in the electric vehicle (EV) industry, because when lithium-ion batteries are charged at high rates, the process accelerates degradation to deteriorate the maximum capacity and power output of the batteries. Sometimes batteries combust when the battery pack is degraded through continuous exposure to heat and pressure caused during charging.

The Korea Advanced Institute of Science & Technology (KAIST) said that its research team has developed a hybrid lithium-ion battery using a specially-made positive electrode (cathode) and a negative electrode (anode). The cathode was made with a special resin that gave the electrode multiporous conductive hollow carbon nanostructure characteristics.

Because of microscopic holes, the cathode was able to have about 12 times larger surface area than conventional carbonized resin and effectively collect and discharge ions through its surface. The anode was made using a germanium-embedded hollow carbon nanosphere material to reduce degradation and maximize the dispersion of lithium ions.

Researchers found the hybrid lithium-ion battery using special electrodes had similar output and energy densities to conventional lithium-ion batteries. Depending on its charge capacity, the new battery was able to be fast-charged in just a few minutes.

"This hybrid lithium-ion battery with a high energy density of 285 watt-hours per kilogram and a power density of up to 22,600 watts per kilogram will become a breakthrough point for the current energy storage systems," KAIST researcher Kang Jeung-kyu said in a statement on April 21. He said that the application of the new hybrid battery can be expanded to every electrical device including EVs.