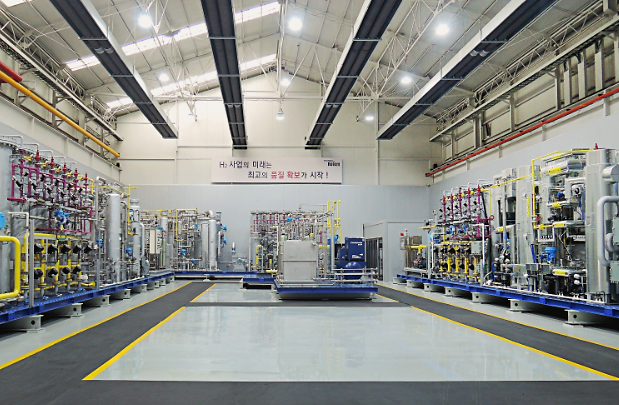 Under a deal with Gangwon Technopark, the operator of science and technology centers in the province of Gangwon, Hyundai Rotem would lead the demonstration of a liquefied hydrogen charging station with its own layout of charging station facilities and operating system.

Hyundai Rotem said it would accelerate its entry into the liquefied hydrogen infrastructure market, such as charging stations and storage containers. "We will proactively respond to domestic and foreign markets by enhancing the competitiveness of our hydrogen charging infrastructure business that is continuously growing," an unnamed Hyundai Rotem official said in a statement on April 22.

Hydrogen charging stations store and supply hydrogen in the form of gas, causing difficulties in long-term storage and transfer. Liquid hydrogen is essential in a government campaign to expand the use of fuel cells. In March 2022, Hyundai Rotem delivered a hydrogen extractor to a fusion charging station that produces and supplies hydrogen using food biogas in Chungju, some 90 kilometers (56 miles) south of Seoul.

The station Chungju can produce up to 640 kilograms of high-purity hydrogen per day. Hyundai Rotem would produce core facilities necessary for building hydrogen infrastructure, such as mobile hydrogen charging stations and dispensers that inject hydrogen into vehicles.