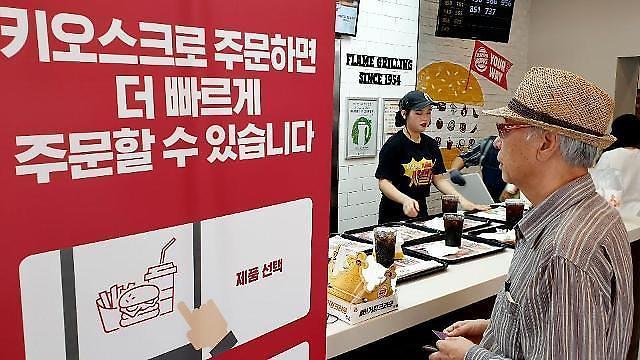 SEOUL -- Seoul has partnered with a domestic digital kiosk maker to analyze the reason why old people find it hard to use unmanned ordering machines. A new standardized user interface will be developed based on the analysis and surveys.

Digital kiosks are widely adopted at South Korean restaurants because shop owners cans save operating costs. The ordering machine with a large touch screen display works in a similar way to a smartphone app but it is hard for people who are not familiar with digital devices. It is common to see people making orders through human clerks instead of using digital kiosks.

The Korea Consumer Agency, a consumer watchdog, found in a September survey of 300 people aged over 65 that 81.6 percent had an experience of using unmanned kiosks at restaurants. Some 51.5 percent had found it hard to use kiosks because of the complicated steps they had to go through to make an order. 49 percent had felt stressed because of their slow order-making speed and the people waiting at the back.

Seoul Digital Foundation operated by the capital city said that it will collaborate with Korea Digital Payments (KDP), a digital kiosk maker, to analyze the reason why old people find it hard to use the unmanned ordering machines and run surveys to look for points that can be improved. A new user interface (UI) will be developed and tested to create a standardized old people-friendly digital kiosk system.

In January 2022, the capital city issued guidelines and standards including large fonts and simpler screen layouts to increase the readability of kiosk menus. However, the non-compulsory guidelines were not adopted by the restaurant industry.

"The guidelines released in January were not compulsory and we did not have the chance to test or demonstrate the new interface. Through this collaboration, we will demonstrate, develop a prototype model, and create new standards that will help old people use digital kiosks easily," Seoul's digital innovation bureau official Kang Min-jung told Aju Business Daily on April 22.

After the standardization, Seoul will gradually increase the number of stores that operate kiosks based on the new old people-friendly version of UI. "We will create an environment where old people can conveniently use digital kiosks without having to mind other people," Seoul Digital Foundation head Kang Yo-sik said in a statement.