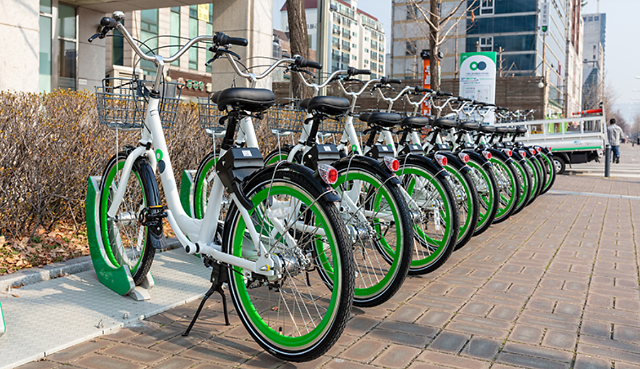 SEOUL -- Seoul's public bike rental service called "Ttareungi," also known as Seoul Bike, has become one of the capital city's most popular public transport systems by being used more than 100 million times in about six and a half years since the service was launched in December 2015. The public bicycle rental system is favored by Seoulites who wish to travel short distances of a few kilometers instead of using crowded buses or subway trains.

As of April 2022, there are some 2,600 Seoul Bike stations located mainly near subway stations and heavily crowded areas. According to a survey conducted by Seoul, 96.9 percent of users were satisfied with Ttareungi in 2021. Some 36.3 percent of Seoulites use the public bike service to commute and 26.8 percent used it for leisure activities. When the first wave of a coronavirus pandemic swept across South Korea in 2020, the number of users rapidly increased to some 59 million, up 24 percent from a year ago. Seoul will increase the number of Seoul Bikes to 43,500 by the end of 2022 from the current 40,500.

Anyone aged more than 13 can rent a public bike for 1,000 won ($0.81) per hour through a smartphone application. Users can easily rent Seoul Bikes by entering their password or through QR code-based verification method at designated stations. While adults mainly ride regular bikes weighing 18 kilograms (40 pounds), teenagers can use smaller bikes weighing 16 kilograms. Discount benefits are provided for those who purchased season tickets. Foreign travelers can use the service just by entering their card information without signing up for season tickets.

Seoul said that the public rental service was used more than 100 million times as of April 25. The number of users with membership has also increased to more than 3.5 million from some 2.7 million in 2020. Seoul said the popularization of Seoul Bike also helped reduce about 1,968 tons of carbon emissions. "Seoul Bike was used more than 100 million times with consistent love from people," Seoul's urban transport bureau director Baek Ho said in a statement on April 27. Baek said the city will try hard to further upgrade the public bike infrastructure.

Bike-sharing service has been adopted in many regions in South Korea including the southern port city of Changwon and Seoul's satellite city of Bundang. Kakao Mobility, the mobility wing of South Korea's internet service giant Kakao, is currently operating more than 10,000 electric bicycles (e-bikes) nationwide. When a user foot on the pedals, e-bikes start moving using electricity. A total of 1,000 e-bikes were deployed in Cheongju some 109 kilometers (68 miles) south of Seoul in October 2021.