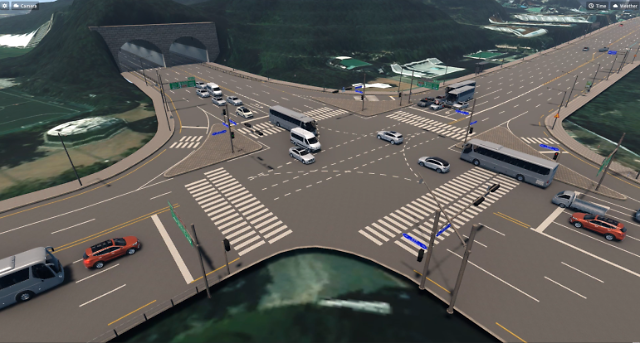 
SEOUL -- Seoul will use digital twin technology to create a virtual autonomous vehicle testing zone that is identical to the real-world testing environment located in western Seoul. The virtual clone of the test drive zone will be open to the public so that any researchers, students, or institutes can freely test and demonstrate self-driving technologies.

Sangam, a western district of Seoul, is a relatively tranquil residential area netted with low traffic roads compared to other parts of the capital city. The area was designated as a pilot zone for the testing of autonomous vehicles in November 2021.

Self-driving taxis were put into a commercial operation in Sangam in February 2022. Four autonomous vehicles in the shapes of compact sport utility vehicles and mini-vans cover circulation routes of about five kilometers (3.1 miles) each. People can hail a ride using a smartphone app. Taxis moving through a circular route will pick up customers standing on the sidewalk.

Seoul will release a simulator for the digital twin of the test zone on April 29. Researchers can use a control tower system to test the safety and efficacy of digital clones of their self-driving vehicles in an environment based on high-definition maps. Various weather conditions such as rain and snow can be simulated.

Digital Twin technology enables the creation of virtual clones of real-life objects and environments. The technology is used to test dangerous equipment or simulate disastrous situations without causing catastrophic damage to the real world. Seoul's digital twin will include actual roads in Sangam as well as school zones, street trees, traffic lights, and real-time traffic.

The simulator will help startups and other research organizations save costs for setting up a virtual simulating zone that incorporates cooperative intelligent transport systems (C-ITS) and various on-road data including the location of traffic lights and road signs. It would cost more than 100 million won ($78,926) to set up a virtual test zone for autonomous vehicles.

"This simulator is like a blessing for universities and autonomous startups that lack funds and technologies. It will also create opportunities for foreign self-driving technology companies to come to Seoul to test their technologies," Yonsei University researcher Kim Shi-ho said in a statement on April 27.