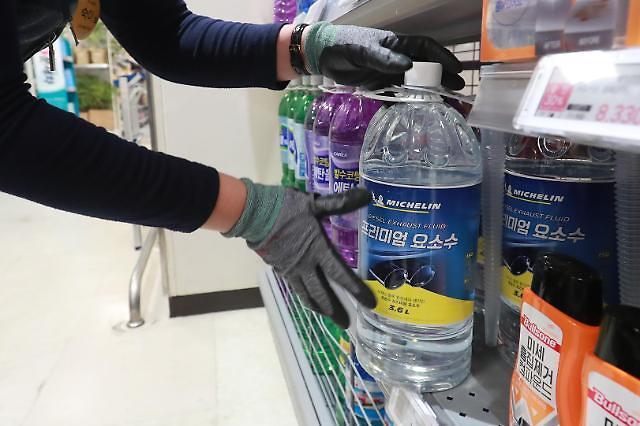 SEOUL -- South Korea will be able to escape fears of a crippling shortage in an essential industrial material that could paralyze traffic by achieving a domestic supply network of ammonium carbonate, a chemical compound that can replace an aqueous urea solution being used to cut pollution created by diesel engines.

The achievement was the result of fast technology development with full government support. Capro, a chemical company that produces raw materials for nylon in South Korea, will produce and sell ammonium carbonate to end the country's heavy reliance on imported urea from China.

The aqueous urea solution decomposes nitrogen oxides, a harmful pollutant, in diesel exhaust emissions. China is a key supplier of urea, which is made by using ammonia extracted from imported coal from Australia. China stopped importing Australian coal in October 2020 in a diplomatic dispute after Australia joined the Quadrilateral Security Dialogue (Quad), a U.S.-led regional forum that includes Australia, India and Japan.

China's curbs on exports sent prices soaring in South Korea's urea market. The Seoul government took special steps to prevent panic buying through the emergency purchase of urea from other countries and the comprehensive use of various diplomatic channels.

Capro will be able to supply about 150,000 tons of ammonium carbonate annually if mass production begins on May 1. The output may not be sufficient to fully meet South Korea's total demand, but it could significantly ease concerns over a severe shortage to be caused by China's export regulations.

Capro's production capacity has the effect of replacing imports of about 300,000 tons a year. The main buyers of ammonium carbonate are domestic power plants, steel mills, incinerator operators, and cement producers. The annual consumption of urea solutions in South Korea was estimated at about 28,000 tons in the automobile market.

Out of about ten million vehicles installed with diesel engines in South Korea, about four million sedans, sport utility vehicles and trucks are subject to European emission standards and use a diesel exhaust fluid (DEF) made with 32.5 percent urea and 67.5 percent deionized water. DEF is consumed in selective catalytic reduction (SCR) that reduces the amount of nitrogen oxides.
© Aju Business Daily & www.ajunews.com Copyright: All materials on this site may not be reproduced, distributed, transmitted, displayed, published or broadcast without the authorization from the Aju News Corporation.