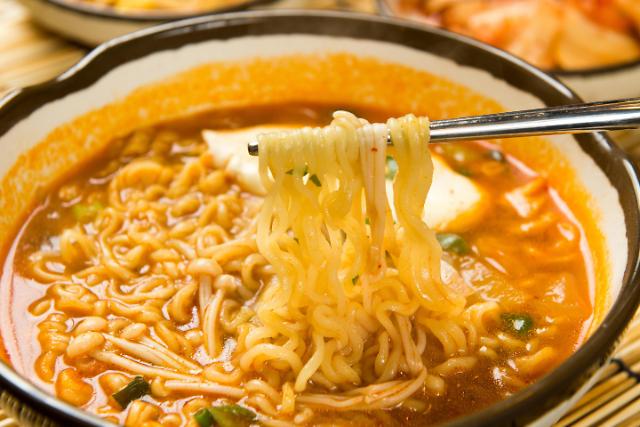 SEOUL -- To meet growing global demands for South Korea's instant noodles known as ramyeon, domestic food company Samyang Foods has built a smart factory with an annual capacity of 600 million instant noodles. Ramyeons made through an automated process will be exported to more than 100 countries.

According to data released by state-run tax organization Korea Customs Service, exports of ramyeon achieved the highest record of $71.5 million in March 2022, up 20 percent from a year ago. The largest importer was China with some $19 million. The United States was the second-largest with $9.7 million, followed by Japan with $5.7 million and Thailand with $2.9 million. Exports to Russia stood at $540,000, down 58 percent from a year ago.

Samyang Foods said in a statement on May 2 that a total of 240 billion won ($189 million) was invested to build the smart factory in Miryang some 280 kilometers (173 miles) southeast of Seoul. The automated factory will increase the company's annual production capacity by 50 percent from the current 1.2 billion to 1.8 billion. Using solar cells, the smart factory can generate about 436 megawatt-hours per year. The renewable electricity power plant can power some 436,000 households.

South Korea's instant noodles have gained global popularity with the growing influence of Hallyu (the Korean cultural wave). Nongshim, a major food company in South Korea, saw a sharp increase in ramyeon sales in 2020 thanks to the popularity of "Ram-don," a mixture of two different instant noodles originally known as "Jjapaguri." The instant noodle was used to portray the rich-poor gap in Parasite.