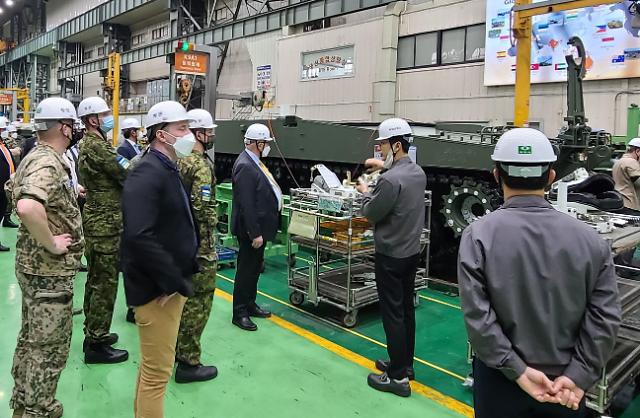 SEOUL -- Hanwha Defense, a major defense company affiliated with South Korea's Hanwha Group, has secured an opportunity to broaden the overseas supply network of the world's most popular self-propelled howitzer, K9 Thunder, through a meeting of user countries such as Norway, Finland and Estonia.

At the first meeting of a K9 user community on April 27-28 at its home base in the southern city of Changwon, Hanwha Defense drew favorable reviews. The user community meeting takes place regularly with a rotating host to have multiple working group sessions where each participant can share his unique experience and knowledge accrued from the operation of K9s.

"I think that those favorable reviews from existing users can eventually be an opportunity to expand our business and increase the number of K9 users. So this user club is a very meaningful event," Hanwha Defense's overseas business division head Lee Boo-hwan said, adding the user club meeting was "very helpful" to attract new buyers, especially in Europe and secure additional orders from those who already use K9s.

The K9 user club meeting comes as European countries step up their arms buildup due to the Russia-Ukraine war. Hanwha Defense said that some participating countries have hinted at the possibility of introducing additional K9 self-propelled guns to strengthen their artillery power.

"As you know, K9 is the world's best-selling model. Many users come together to share the concepts currently operating in each country and the tactical concepts used in each country," Lee said. "Norway, Finland, Estonia, and Australia have different levels of operations in different countries."

Hanwha Defense said that foreign delegates have expanded the understanding of each country's K9 operational situation by sharing the characteristics and operation status of K9s, the concept of artillery power operations, and the direction of development, with practical mutual cooperation and support measures sought through working groups in the fields of operation, education and maintenance.

An Estonian military official voiced satisfaction with K9's excellent mobility and efficiency on the battlefield. "It is a really good piece of equipment. We are satisfied for the purpose of the fire support capability and mobility," he said, assessing K9s as a system that goes well through different types of terrain. "It's effective in terms of going into a position or staying on the roads."

A Finnish delegate echoed with positive comments on K9's ability to evade counterattacks after doing its fire mission. "I think it’s the ability to do the fire mission with good speed and also the capability to maneuver in our operational environment," he said, adding the user club meeting was a good opportunity for specialists from different nations to exchange experiences from different operational environments and different types of conditions.

Norwegian officials said their army has improved its firepower with the K9 system. "We’re really satisfied with what we have seen so far with how the K9 is capable of managing the climate status," said one official.

The K9 is by far the most popular self-propelled howitzer in the world. Egypt inked a $1.7 billion contract in February 2022 to introduce K9A1, the upgraded version of K9, and support vehicles, becoming the eighth foreign country to adopt the artillery system after Turkey, India, Poland, Norway, Finland, Estonia and Australia.

Australia signed a $730 million contract in December 2021 to locally produce 30 AS9 Huntsmans and 15 supply vehicles.  The deal to produce AS9 Huntsman, the Australian version of Hanwha Defense's K9, marked the first time Australia has acquired major defense equipment from an Asian nation.

With the help of a state defense research body, Hanwha Defense has successfully completed the development of K9A2's core technology that would bolster its bid for arms acquisition programs in Britain and other advanced countries. Hanwha Defense has created an industrial partnership with local defense companies in Britain to supply K9A2, the most advanced version of K9, that features a fully automated turret and composite rubber tracks.