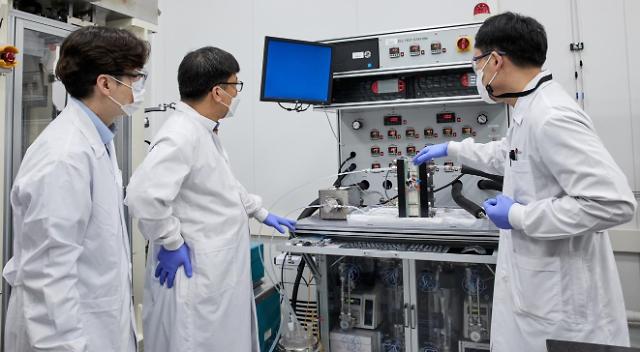 SEOUL -- LG Chem, the chemical unit of South Korea's LG Group, joined hands with a state institute to develop and accelerate the commercialization of an electrochemical reactor to convert carbon dioxide into a core material for plastics. The reactor is also capable of producing various types of syngas.

The reactor was developed through a project that began in April 2021 to develop carbon capture and utilization (CCU) technologies and hydrogen energy technologies which are key elements for creating a carbon-neutral environment. Carbon dioxide (CO2) can be captured directly from an industrial source by using a variety of technologies.

LG Chem and the Korea Institute of Science and Technology (KIST) have jointly developed an electrochemical reactor capable of converting CO2 into carbon monoxide (CO), which is a highly-valued core material for the production of plastics, syngas, and methanol. The electrochemical reactor with a high electrical current efficiency of more than 90 percent can control the ratio of CO and other types of gas to produce syngas.

LG Chem and KIST will work together to create a larger reactor, which is about 10 times bigger than the prototype, and use the reactor for the production of ethylene, the core material for petrochemical products. "We will continue to strengthen our carbon-neutral technology development capabilities," LG Chem's chief technology officer Yu Ji-yung said in a statement on May 9.