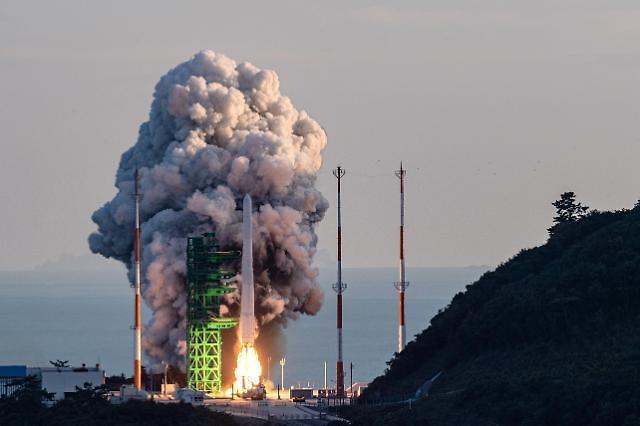 SEOUL -- Unswayed by a slight technical glitch exposed in the launch of its first three-stage indigenous rocket in 2021, South Korea will push ahead with the development of a next-generation launch vehicle capable of thrusting bigger payloads for lunar or Mars exploration using a mixed fuel of liquid oxygen and kerosene.

A blueprint drawn out by the Ministry of Science and ICT for the development of South Korea's next-generation space launch vehicle called "KSLV-III" waits for an economic feasibility study. The KSLV-III project would cost 1.93 trillion won ($1.51 billion) for nine years from 2023.

KSLV-III is a two-stage launch vehicle that will be more advanced and larger than its previous version, Nuri, which is a three-stage indigenous rocket launched in October 2021. Although Nuri succeeded in reaching its target altitude, it failed to release a dummy satellite into orbit. A second launch is set for June 2022.

Nuri uses a gas generator engine, which has lower thrust power than multi-stage combustion engines. The next-generation launch vehicle will use technologies such as multi-time ignition, thrust control and a staged combustion cycle that allows propellant to flow through multiple combustion chambers for combustion in stages. KSLV-III's fuel efficiency is high, but its main disadvantage is engineering complexity.

The economic feasibility of two-stage projectiles is greater than that of three-stage projectiles, the science ministry said in a statement on May 9, proposing a study on a liquid methane engine. Methane has a higher performance than other fuels. Selecting liquid methane is a prevailing trend for recent rocket engine developments due to its affordability, reusability, storability for deep space exploration, and prospects for in-situ resource utilization.

As reusable projectiles that can drastically reduce costs emerge as a game-changer in the space industry, the ministry called for the development of re-ignition and thrust control technologies in preparation for reusable launchers.

The ministry presented an action plan in March 2022 to develop a lunar lander weighing more than 1.5 tons that would carry out scientific research on the surface of the moon in the early 2030s. Nuri can thrust up to 3.3 tons of payload into Earth's low orbit, while the next-generation launch vehicle will be designed to thrust up to 10 tons into low orbit and 3.7 tons into a geostationary transfer orbit.

"It is meaningful that South Korea will secure full-fledged space exploration capabilities through the development of next-generation launch vehicles," Kwon Hyun-joon, a science ministry official in charge of space, nuclear and big science policy, said in a statement on May 9. He said the KSLV-III project would play a major role in enhancing rocket development capabilities in the private sector.

For its Space Pioneer" program, the Seoul government has vowed to create a self-sustaining industrial ecosystem and cultivate innovative companies like Space X, a U.S. aerospace company. South Korean companies will be supported to build a supply chain using domestic parts as much as possible.

Technology will be accumulated through four more launches by 2027 of the Nuri rocket capable of placing a satellite into Sun-synchronous orbit, which is a nearly polar orbit around a planet, in which the satellite passes over any given point of the planet's surface at the same local mean solar time. It is useful for imaging, reconnaissance satellite, and weather satellites.

However, space experts voiced disappointment after the separate idea of carrying out South Korea's first asteroid exploration mission in 2029 when Apophis makes a close approach to Earth has not been selected for a preliminary feasibility study due to financial and other reasons. Apophis with an estimated diameter of 370 meters will come no closer than 31,600 kilometers (19,600 miles) above Earth's surface.