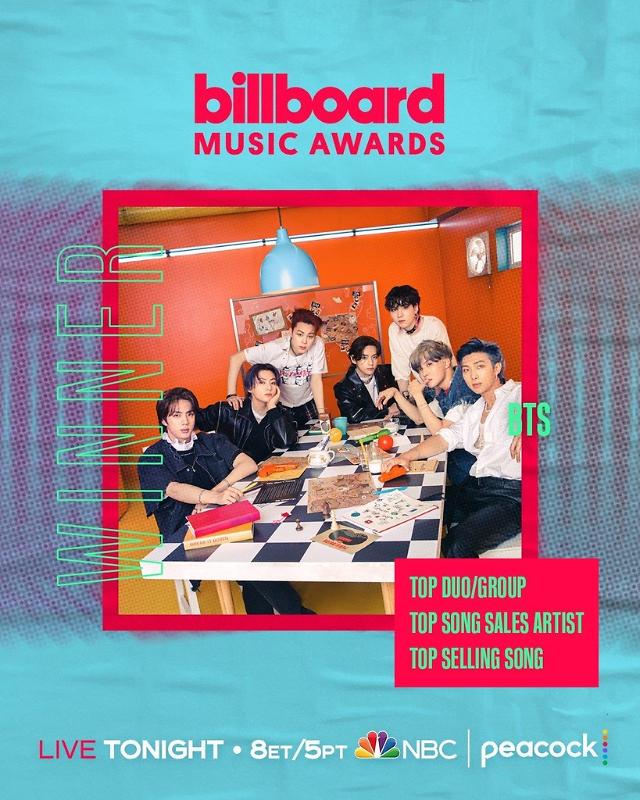 [Courtesy of the Billboard Music Awards]

The group won in "Top Duo/Group," "Top Song Sales Artist" and "Top Selling Song," Billboard said ahead of its award ceremony through its website on May 15. "Butter," the band's full English song that topped the Billboard singles chart in 2021, was selected in the Top Selling Song category. In the Top Duo/Group category, BTS competed with Silk Sonic, a U.S. R&B duo group, and Glass Animals, a British indie rock band. BTS was selected as the winner for the second consecutive year in the Top Song Sales Artist, beating global stars including British singers Adele and Ed Sheeran.

In March 2022, the band hosted an offline Seoul concert. About 45,000 fans attended the offline concert and some 2.4 million watched the performance through online platforms. In 2021, the group attracted about 210,000 fans through "BTS Permission to Dance on Stage - LA" at SoFi Stadium in Los Angeles. The concert was BTS's first offline concert in about two years after the band's "Love Yourself: Speak Yourself" world tour held in Seoul in October 2019.

When the first wave of a coronavirus pandemic swept across the global community in 2020, BTS attracted about 756,600 fans 2020 through a live virtual concert using various digital and social media platforms in a special studio.
© Aju Business Daily & www.ajunews.com Copyright: All materials on this site may not be reproduced, distributed, transmitted, displayed, published or broadcast without the authorization from the Aju News Corporation.