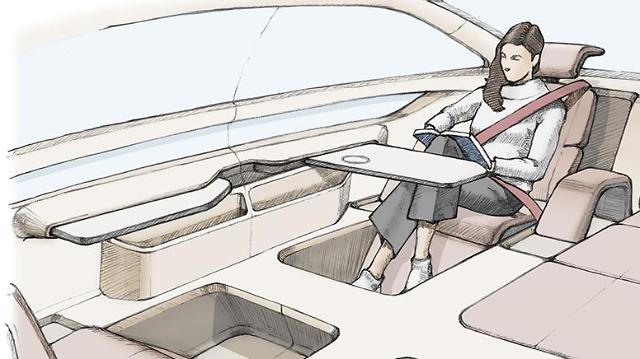 
SEOUL -- South Korea's Hyundai auto group has released a future mobility concept that would allow passengers to fully rest while on the move in the era of self-driving by applying a specially designed "full-flat" seat and a unique heating system inspired by the underfloor heating method of Ondol that can maintain heat for an extended period and keeps both the floor and the air warm.

In traditional Korean architecture, Ondol used heat from kitchen furnaces to warm the rock and clay floor of Hanok, a form of traditional Korean houses. Instead of Ondol-hydronic radiant floor heating, modern-day houses and apartments have a modernized version of the ondol system.

Through its Tech site, the auto group has released a "Mobility Ondol" concept that emphasized communication between passengers by symmetrically configuring front and rear seats to face each other. As the internal space of Mobility Ondol is based on a fully autonomous driving system, there is no separate driving operation unit.

The heating method of Ondol using heat conduction increases heating efficiency by utilizing the heat of batteries generated by the operation of electric vehicles. Hyundai said it has studied a heating system based on the concept of energy harvesting, a technology that collects waste or surplus energy to obtain electricity.

The interior space is higher and wider than conventional vehicles, with the floor equipped with a large-capacity battery. Hyundai said that the space between the seat and the battery can be used as an auxiliary battery or cargo loading space, and there is a separate storage space under the seat for footrests, shoes and bags.


A "full flat" seat with a wide front-rear operation range allows passengers to stretch their legs and change seats into a bed. The seatback moves back to secure as much space as possible for passengers to lie down, and the leg rest becomes parallel to the seat cushion, creating a flat structure. A safety blanket functions as a seat belt and can be fixed to the floor for safe moving while sleeping.

A folding table for meals will be located on the door trim, and pillows or blankets can be stored in the space between seat bags and seat cushions. The multi-structured rail moves by a large width according to each posture, and the cushion link and the backlink adjust the seat cushion and seatback angle, respectively.