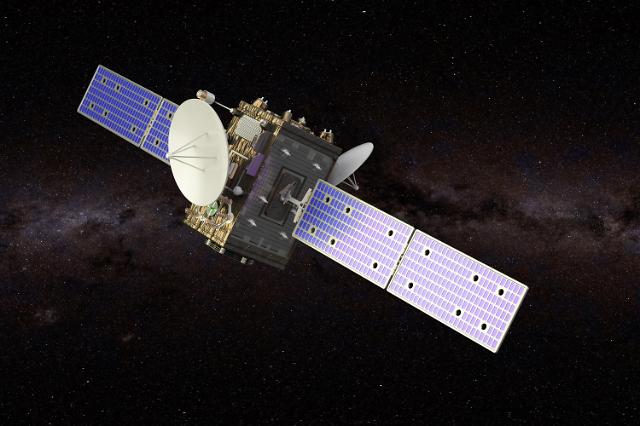 SEOUL -- BTS would be remembered as a space trailblazer if its global mega-hit song, "Dynamite," were streamed from Moon to Earth using an experimental wireless space internet service as part of South Korea's space program to send a lunar orbiter aboard a rocket manufactured by SpaceX.

"Dynamite" aims to be the first K-pop song in space when South Korea's first lunar orbiter, the Korea Pathfinder Lunar Orbiter (KPLO), will be launched on August 1. Fans think it would be a big achievement for the seven member-band that grabbed trophies for six consecutive years at the Billboard Music Awards.

"As a South Korean, I think such a decision is very refreshing and I am proud that South Korea is competing with other countries around the world in the development of science and technology," Bae Jun-yong, a 24-year-old Soongsil University student, told Aju Business Daily on May 17.

"Dynamite" is a disco-pop song that was released in August 2020 and stayed in Billboard's top 100 most popular song chart for 32 consecutive weeks. BTS was nominated for the Best Pop Duo/Group Performance category with the global hit song.

"BTS' popularity is beyond imagination," Kim Na-hyun, a 26-year-old businesswoman, said after knowing about how the group's song will be transmitted from lunar orbit using space internet equipment developed by the Electronics and Telecommunications Research Institute (ETRI), a state research body involved in South Korea's lunar exploration project.

ETRI will test whether it can implement a wireless internet environment that connects satellites or exploration robots on the moon using space internet equipment. Because a delay of at least 1.281 seconds takes place when data is exchanged between the Earth and the moon, ETRI has developed node technology that enables interplanetary space internet to receive and send back signals properly.

The orbiter to be launched on SpaceX's Falcon-9 at Cape Canaveral Air Force Station in Florida is to settle in orbit around the moon on January 1, 2023, according to a timetable disclosed by the Korea Aerospace Research Institute, a space agency in charge of the lunar mission. After a test drive for a month, various missions will be carried out by December 2023.

KPLO will roam around the moon and look for candidate sites for the landing of South Korea's first lunar lander weighing more than 1.5 tons that would carry out scientific research on the surface of the moon in the early 2030s. A high-resolution camera will be mounted on KPLO to film candidates for landing. Reflected waves of the moon's surface and weather conditions will be also analyzed.

If successful, South Korea will be the seventh country to launch a lunar orbiter, after the United States, Russia, China, Japan, the European Union and India.
© Aju Business Daily & www.ajunews.com Copyright: All materials on this site may not be reproduced, distributed, transmitted, displayed, published or broadcast without the authorization from the Aju News Corporation.