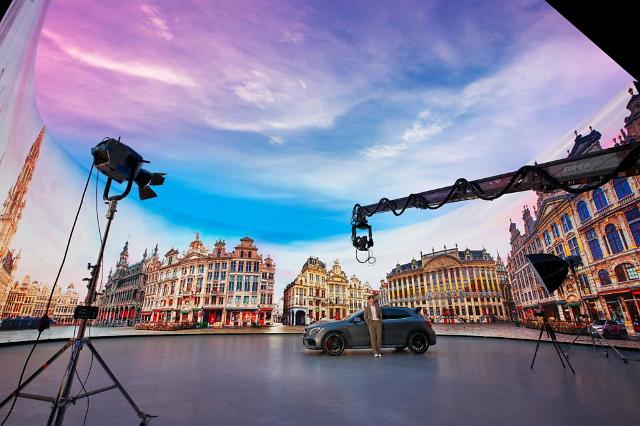 Samsung said that the real-time, virtual set would reduce image compositing needs and save time and production costs. The screen measures over 1,000 inches in a custom oval display of 20 meters in diameter and seven meters in height. The screen enhances visual expression with vivid colors and cinema LED picture quality and details. 360-degree video shooting is possible.

"We are excited to see the innovation that this new space will produce, bringing the latest content to life like never seen before on our incredible display," Ha Hye-sung, executive vice president of Samsung's visual display business, said in a statement on May 24.

Samsung said that The Wall is designed for easy management in any environment due to the ability to manage and make color adjustments remotely as well as the dust and contamination-resistant LED protective films.

At the new studio, creators can design environments to specific requirements, along with a variety of installation options such as ceiling installation and convex or concave design, depending on the internal studio design.

CJ ENM's studio will use the visual content creation technology of Epic Games, an American 3D game engine company. Epic's "Unreal Engine" was used in the production of many Hollywood content and video games such as "The Mandalorian," a popular Star Wars franchise drama series created by Disney. The studio will create computer-generated scenes including actors and environments in real-time.