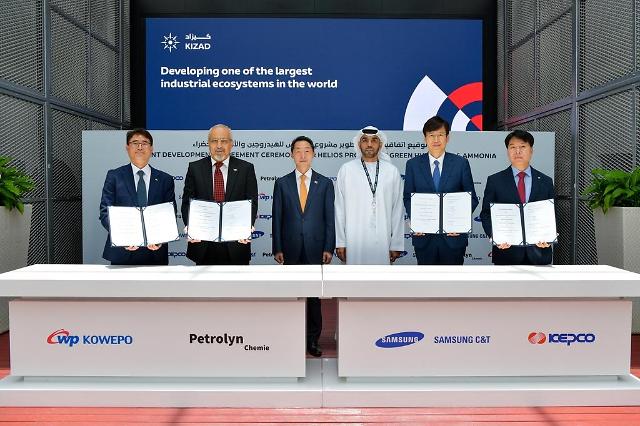 SEOUL -- A consortium of South Korean companies has secured a crucial deal to build a green ammonia factory in the capital of the United Arab Emirates. Because no carbon is generated, green ammonia is considered an important part of a sustainable hydrogen ecosystem.

Together with Petrolyn Chemie, a UAE-based green ammonia developer, a consortium led by South Korea's state power company, Korea Electric Power Corporation (KEPCO), will build a green ammonia factory in Abu Dhabi's Khalifa Industrial Zone. The factory is to produce 35,000 tons of green ammonia per year before increasing its production capacity to 200,000 tons.

Ammonia is produced through a chemical reaction between hydrogen and nitrogen at high pressure and temperatures of 450 degrees Celsius. Green ammonia can be produced through electrolysis powered by renewable energy. The decarbonization of ammonia production is an integral part of the global transition to net-zero emissions by 2050.

In July 2021, a six-member consortium including POSCO was launched in South Korea to establish a green ammonia value chain covering production, maritime transportation and storage. The steel group has partnered with Australia's energy company, ORIGIN ENERGY, to import ammonia. POSCO would develop technologies to extract large amounts of hydrogen from ammonia and supply green hydrogen to power stations and industrial facilities.