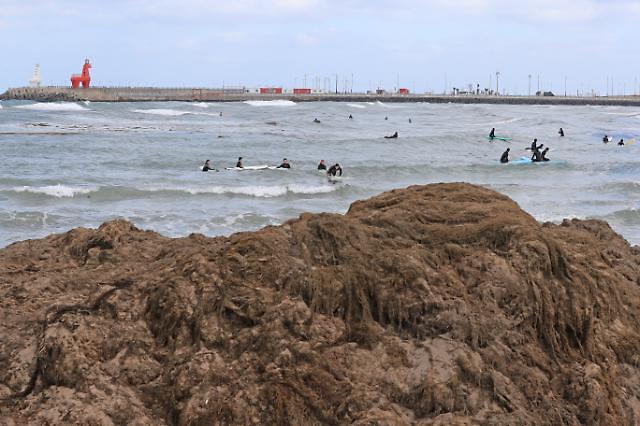 
SEOUL -- South Korea has launched a state project to develop biodegradable marine bioplastic materials using seaweed such as sargassum horneri, a species of brown macroalgae called "devil weed" from China that is detrimental to a foreshore ecosystem and damages sea farms almost every year.

Since bioplastics mainly use grain biomass such as corn as raw materials, their production is still insignificant due to economic problems caused by expensive raw materials. The Ministry of Oceans and Fisheries said it would develop eco-friendly plastic materials based on brown algae by 2026 in cooperation with Jung Gyoo-yeol, a professor of chemical engineering at Pohang University of Science and Technology (POSTECH).

The ministry anticipates a great industrial ripple effect, saying that plastic materials using sargassum horner as well as seaweed and kelp by-products would have high economic efficiency and an environmental protection effect. "It is an international trend to seek solutions to environmental pollution using marine biomass," Jung Jae-kwan, a ministry official in charge of marine and fishery life resources, said in a statement on June 7.

Based on strains that do not require a separate pretreatment process, the ministry said its project is aimed at developing technologies for producing itaconic acid, 3-Hydroxypropionic acid, and lactic acid, which are bioplastic materials with high industrial utilization.

Iaconic acid is primarily used as a co-monomer in the production of acrylonitrile butadiene styrene and acrylate latexes with applications in the paper and architectural coating industry. 3-Hydroxypropionic acid is used in the industrial production of various chemicals such as acrylates. Lactic acid is used as a synthetic intermediate in many organic synthesis industries and in various biochemical industries.

The ministry said that researchers would develop monomer blending technology to have the properties of plastics required for each use to compensate for the shortcomings of eco-friendly plastics that have degraded properties compared to petroleum-based plastic products.

Sargassum horneri is an annual alga that is common along the coast of countries in Northeast Asia. It grows in early autumn through winter, becoming mature in spring, when the seawater temperature was 11.6~15.2 degrees Celsius. The species grows attached to a hard substrate and blooms into a kelp forest and drifts up the eastern coast of China towards the Korean peninsula as an invasive species.

The accumulation of plastic wastes has become a serious global problem. South Korea has stepped up research into bioplastics. Disposable plastic cups can be replaced with bioplastic ones made of starch. Industry experts suggest the market's demand and distribution networks for biodegradable bioplastics must be established before commercialization kicks into full gear in order to popularize degradable bioplastics.