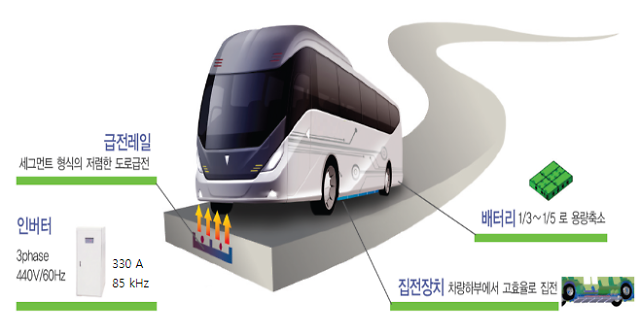 A trial run is to begin in 2023 after Seoul established wireless charging infrastructure for two self-driving buses at a bus stop installed with wireless chargers using a frequency in the 85 kHz band. They can run six kilometers after charging for about six minutes.

Seoul will adopt more than 300 autonomous vehicles and related services by 2026. Autonomous driving infrastructure that provides real-time traffic signal information on every road with more than two lanes will be built for safe operation. In 2022, self-driving buses will be operated near Cheonggyecheon, a stream that flows through the heart of Seoul.

On a different downtown circular route covering 16km, a wireless charging service will be provided for one or two regular electric buses. Wireless chargers will be installed on the floor of bus stops and garages for charging during break times.

The Seoul city government will expand its wireless charging technology after evaluating the results of the pilot project. City buses and taxis can be charged from time to time while passengers get on and off at stops or driving. "We hope it will be an alternative to solve the problem of installing charging stations if the technology demonstration is completed and commercialized through a wireless charging technology pilot project," Yoo Yeon-sik, a Seoul city official, said in a statement on June 7. Seoul will replace 10 percent of diesel vehicles with electric vehicles by 2026.

In September 2020, South Korea approved the commercial use of a charging system that enables wireless power transmission while an electric vehicle is at rest or in motion. WiPowerOne, a wireless power charging solution developer in South Korea, has launched a special demonstration to verify the safety and effectiveness of its wireless charging service using an 85kHz resonance frequency. Resonance frequency happens when the oscillator receives an external force at a frequency equal to its natural frequency, resulting in a large amplitude of vibration.

Domestic wireless charging technology has been upgraded to enable fast charging of more than 150 kilowatts per hour. An electric bus can run more than 21km with a six-minute charge.