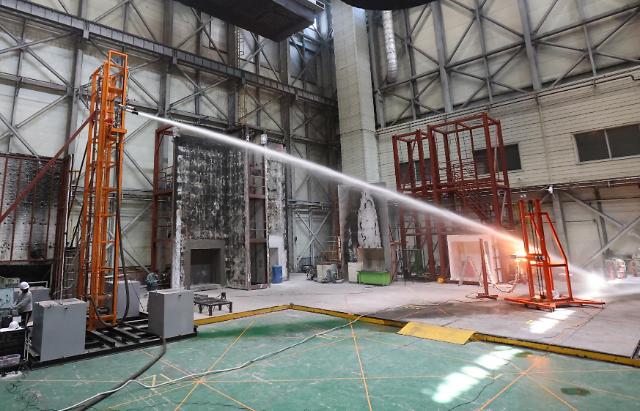 [Courtesy of the Korea Institute of Machinery and Materials]

SEOUL -- South Korea's state research body has developed a new system that can recognize a fire in the early stages and automatically spray water to fire origins like firefighters for the quick suppression of fires in ships, marine plants, and high-rise apartments. It can compensate for the drawback of existing fire extinguishing facilities such as sprinklers that spray water to the entire place.

The Korea Institute of Machinery and Materials (KIMM) said that the autonomous fire extinguishing system is designed to operate only on actual fires and minimize damage to surrounding equipment and facilities by determining the authenticity of a fire using sensors, monitors, and artificial intelligence. When false alarm rings, traditional equipment spray unnecessary fire extinguishing water, causing great damage.

The new system's fire detection accuracy is 98 percent or more, and fire extinguishing water can be sprayed up to 65 meters, the institute said. Through simulation, researchers found that the new system could be applied to ships, ammunition depots, military warehouses, aircraft hangars, and logistics warehouses.

KIMM said that the new system can put out a fire in the early stages in case of simultaneous fires in various sections of a ship. "We hope that expect rapid fire fighting is possible when installed in cargo ships, passenger ships, marine plants, and high-rise apartments where fire ladders are not available, along with the military sector," KIMM's senior researcher Chung Jung-hoon said in a statement.