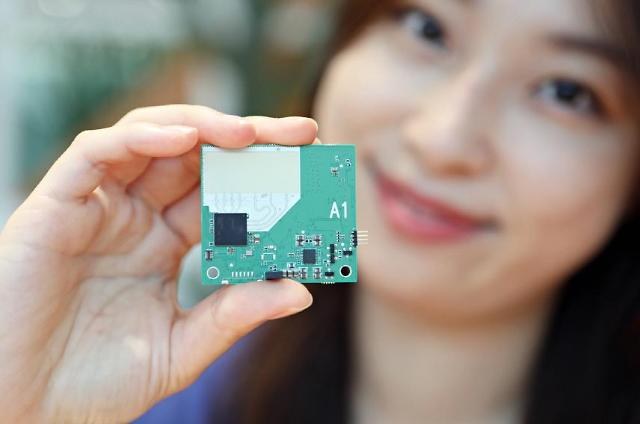 
SEOUL -- LG Innotek, the electric component unit of South Korea's LG Group, unveiled a new in-vehicle radar module capable of detecting the presence or movement of life using radio waves. The module boasting the world's highest resolution and performance can prevent theft and identify the location and number of passengers in all seats as well as bio-signals and movements.

With the aim of commercializing its new module in 2024, LG Innotek vowed to actively target global markets, citing a rapid increase in demand for car radar modules. The new module can implement functions necessary for self-driving cars, and LG Innotek would add functions that can easily control devices such as air conditioning temperature and music volume with hand gestures.

"It was difficult for existing products to distinguish objects accurately, but LG Innotek overcame such limitations," LG Innotek's automotive components business head Yoo Byaeng-kuk said in a statement on June 28. "LG Innotek's in-vehicle radar module will have a big impact on the market," he said, pledging the introduction of future car parts that can advance the era of fully autonomous driving.

The module's resolution is 40 percent higher than existing products. LG Innotek reduced the signal processing time by 30 percent for faster sensing. LG Innotek optimized antenna layout structure and implemented 1.3 times higher performance with the same number of antennas as before by developing its own software that minimized signal detection errors and increased fine signal sensitivity and accuracy.

Existing products should be installed only at a designated location because it's difficult to change the direction of radio waves. LG Innotek said customers can install its new module anywhere they want by changing the design of some antennas.

The new product is able to catch even the fine breathing of infants, accurately identify the location and size of passengers, and optimize air bag pressure to suit adults and children. It also has a function to notify the driver through a warning sound or alarm when suspicious movements are detected inside or around the vehicle after parking.

LG Innotek has produced various modules for car components as part of a group-wide strategy to put more resources into other viable sectors such as robotics, organic light-emitting diode technology, infotainment systems and powertrain parts. LG Electronics formed a consortium with the University of Toronto in 2021 to develop artificial intelligence algorithms for autonomous vehicles that can recognize objects more accurately.