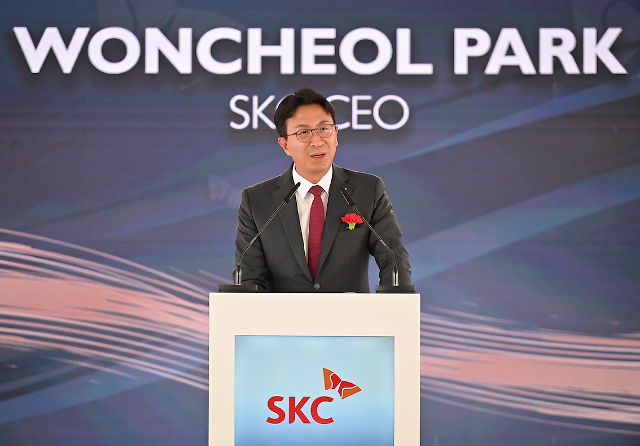 SEOUL -- The subsidiary of SKC, a chemical material unit of South Korea's SK Group, will complete the construction of a thin copper foil plant with an annual production capacity of 50,000 tons in Poland in the first half of 2024. The plant is part of a strategy to establish a global production system.

SKC said that its wholly-owned subsidiary, SK nexilis, would invest 900 billion won ($691 million) to complete the construction of its plant in Poland in the first half of 2024. It would be the biggest copper foil plant in Europe. A groud-breaking ceremony was held on July 7 at an industrial base in Stalowa Wola in southeastern Poland.

SK nexilis aims to establish an annual production system of 250,000 tons in South Korea, Malaysia, Europe and North America by 2025. Construction of a 50,000-ton plant in Kota Kinabalu, Malaysia, began in July 2021. The company is looking for a place to build a 50,000-ton copper foil plant in North America for commercial operation in 2025.

"The plant in Stalowa Wola, Poland, will be Europe's No. 1 copper foil production base," an unnamed SKC official said in a statement. "By 2025, we will expand global production to 250,000 tons per year and secure advanced technology through continuous R&D investment and establish ourselves as a global leader."

SK nexilis would use the plant in Poland as its hub in Europe as it is geographically close to factories run by battery manufacturers. The company will consider additional expansion according to the growth of European markets.

Battery foils made of aluminum and copper are used as anodes and cathodes for secondary batteries. Foils work as the bridge between external components and internal lithium-ion transports. SK nexilis is developing high-strength thin copper foil technology that can withstand the volume expansion of silicon anode materials.

SKC, a leading polyester film producer in South Korea, has proposed a change in its business structure to focus on materials for semiconductors and secondary batteries.