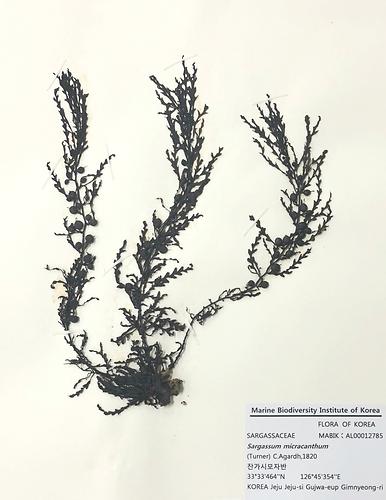 [Courtesy of the Marine Biodiversity institute of Korea]


SEOUL -- Sargassum micracanthum, a brown alga that grows naturally on rocks along the coast has been largely ignored because it's not worth using. From its extract, South Korean researchers have discovered a new butenolide derivative that can be used as an anti-inflammatory biological material.

About 30 species of Sargassaceae (gulfweed) are native to the sea around the Korean Peninsula, and their active ingredients were found to show anti-inflammatory effects. The extract of Sargassum micracanthum was known to exhibit diverse biological activities.

In a study into the extract of Sargassum micracanthum, researchers from the Marine Biodiversity Institute of Korea (MABIK) have discovered a new compound of the butenolide family and named it Sargassumin B. Additionally, they have isolated a Farnesylacatone compound.

In cell experiments, researchers confirmed that both Sargassumin B and Farnesylacatone had inflammatory effects, the institute said. "We hope that will contribute to the use of Sargassum micracanthum, which has not been very useful, as a biological material," MABIK head Choi Wan-hyun said in a statement on July 8.