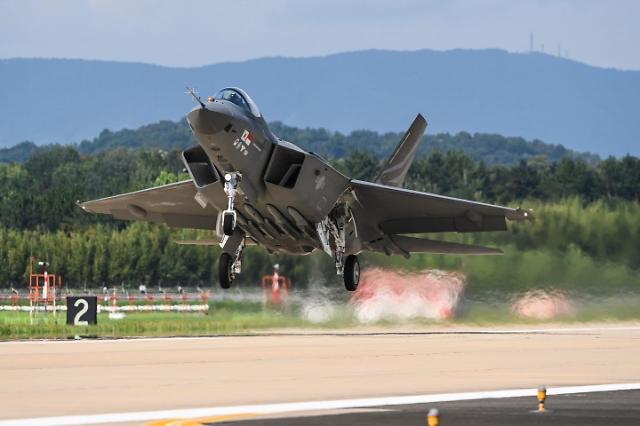 The first jet fighter christened "KF-21 Boramae (Young Hawk)" made a successful 33-minute test flight on July 19 in a closed event on a military runway in the southern city of Sacheon, the home base of Korea Aerospace Industries (KAI), the sole aircraft maker in South Korea, according to the Defense Acquisition Program Administration (DAPA).

"It symbolizes a new leap forward in domestic aviation technology and our rise to become a high-tech powerhouse, as we are one step closer to the successful development of Korean fighter jets," DAPA said in a statement. KAI verified the basic flight performance of the supersonic jet fighter, with the pilot raising and lowering its engine power and checking whether it was moving in the desired direction and whether various equipment worked properly.

Production is set for 2026 if KAI acquires satisfactory results through 2,000 sorties of test flights, DAPA said. Research began 20 years ago. However, South Korea had to officially launch the 8.8 trillion won ($6.7 billion) project led by a consortium of KAI and US aerospace giant Lockheed Martin in January 2016 due to technical reasons. Washington has been reluctant to transfer sensitive technologies.

The KF-21 project is aimed at manufacturing 120 fighter jets that would replace South Korea's aging fleet of US-made F-4 and F-5 fighters. Specifications outlined by KAI showed that the fighter's maximum speed is Mach 1.81 with its range put at 2,900 km. With a maximum payload of 7.7 tons, 10 "pods" for missiles and fuel barrels are installed on the bottom of the fuselage and wings.

"The KF-21 Boramae succeeded in the historic first flight today," KAI vice president Ryu Kwang-su told reporters. "It is an infinite honor to break the expectation that it will be difficult and impossible, and to show the results of our challenge for the success of development to the people today."

In its journey to develop supersonic fighter jets, South Korea rolled out the first KF-21 prototype installed with an advanced and sophisticated radar system in 2021. With technical support from an Israeli firm, the state-run Agency for Defense Development (ADD) and Hanwha Systems have developed active electronically scanned array (AESA) radars that can electronically steer the beam of radio waves to point in different directions, allowing aircraft to radiate powerful radar signals while still remaining stealthy.

South Korea has yet to overcome challenges such as the development of a long-range missile system and seekers for missiles to track ground and air targets. Germany's IRIS-T and MBDA's Meteor have been selected for air-to-air short- and mid-range missiles. As for the long-range air-to-ground weapon, South Korea has pushed for the development of its air-launched cruise missile (ALCM) by 2028.

An IRST system is a method for detecting and tracking objects which give off infrared radiation, such as the infrared signatures of jet aircraft and helicopters. The use of infrared sensors means that there is no emission of electromagnetic signals, compensating for the vulnerabilities of radar and improving the stealth function.

EOTGP detects and tracks ground targets day and night. Infrared cameras, daytime cameras, and laser sensors are made into a thin bundle and mounted on the underside of the fighter. Since visible light is also used, it has the advantage of not being swayed by disturbance of interference radio waves. EW Suite is an electronic warfare device that detects and analyzes enemy radar early and prevents attacks.