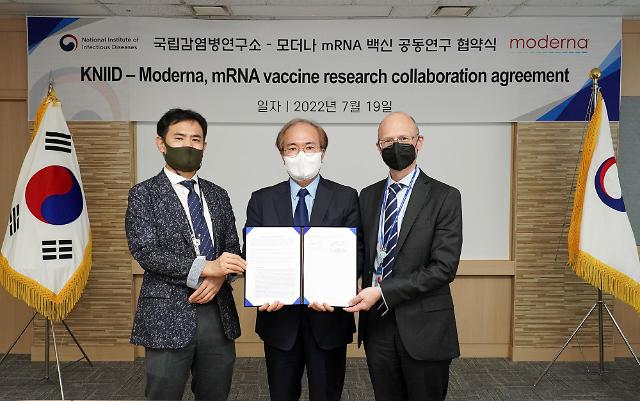 [Courtesy of the Korea Disease Control and Prevention Agency]


SEOUL -- Moderna, a pharmaceutical and biotechnology company in the United States, will work with a state research body in South Korea to develop a vaccine based on messenger ribonucleic acid (mRNA) for severe fever with thrombocytopenia syndrome (SFTS), a newly identified bunyavirus that appears to be carried by ticks.

SFTS is a newly recognized viral hemorrhagic fever that was first identified in central China in 2009 and spread to some Asian countries. The virus has killed 277 people in South Korea since the first patient was reported in 2013.

Moderna has signed a research collaboration agreement with a research institute controlled by the state-run Korea Disease Control and Prevention Agency (KDCA) to develop an mRNA vaccine candidate for SFTS. The main medius of SFTS was identified as haemaphysalis longicornis, a long-horned bush tick.

"The mRNA platform technology can be applied not only to vaccines but also to develop treatments for various and rare diseases, so we will actively expand mutual cooperation with excellent domestic and foreign research institutes," Korea National Institute of Health head Kwon Jun-wook said in a statement on July 20. Moderna, which produces a COVID-19 vaccine, has cooperated with South Korean researchers in the development of various vaccines.

mRNA is a transient intermediator between genes and proteins. It has emerged as a new category of therapeutic agent to prevent and treat various diseases. To function in vivo, mRNA requires safe, effective and stable delivery systems such as lipid nanoparticles, the most clinically advanced non-viral gene delivery system.

DNA vaccines transfect a specific antigen-coding DNA sequence onto the cells of an immunized species, while mRNA vaccines teach cells how to make a protein that triggers an immune response for the production of antibodies. DNA vaccines are safer but there is a disadvantage that raw material inputs are higher. The advantages of RNA vaccines include production speed and lower cost, but they may elicit an unintended immune reaction, and mRNA vaccines can be easily broken by small shocks, making them difficult to transport and store.